Fronted by the unique Marcie (Mark) Free, KING KOBRA was one of the outstanding acts from the ’80s US Melodic Hard Rock scene. Their two first, most celebrated albums have been ‘Remastered & Reloaded‘ by Rock Candy Records for our pleasure.
“Thrill Of A Lifetime” is their second effort, a much more melodic oriented affair.

On “Thrill Of A Lifetime”, King Kobra, their management, their recording label and – truth to be said, founder member Carmine Appice – decided to drastically change the musical direction.
The quite menacing hard rocking sound from their debut album morphed into a poppy AOR / radio friendly / keyboard dominated style, according to the mid-Eighties US trend.

The album overall ‘waterfall of synthesizers’ sound alienated first time fans looking for a continuation of the debut.
I think you need to approach “Thrill Of A Lifetime” from a new perspective: this is a record focused to a different audience. And that target were lovers of slick, poppy, wimpy AOR with a little edge and anthemic choruses.

Seeing “Thrill Of A Lifetime” as a typical middle-80s keyboard driven album with FM radio orientation, this is a superb record. There’s compressed electronic drums, synth galore and killer choruses.
The material was spearheaded by the hugely infectious ‘Iron Eagle (Never Say Die)’, a hit from the ‘
Iron Eagle’ movie soundtrack. This song is an immense anthem and if you love ’80s pumping AOR this track alone worth the disc.

We find a fantastic melody on ‘Second Time Around’ which always reminded me of Night Ranger, a Loverboy-like catchy winner on ‘Dream On’, and a stronger rocker on title track ‘Thrill Of A Lifetime’.
I hear some Foreigner touches in ‘Feel The Heat’, you can’t go wrong with a song titled ‘Only the Strong Will Survive’, while ‘Overnight Sensation’ is pure fun.
For those missing the hard rocking edge from the first album, ‘Raise Your Hands To Rock’ and ‘Party Animal’ (where Appice play his ‘wood drums’ with fury) will rock your socks off.

Then there’s the rap-rocker ‘Home Street Home’ mixing hard rock with an early, rapping rhythm / vocal style which perhaps is the song that most controversy generated.
Its metal meets rap certainly was ahead of its time (Beastie Boys sold millions with this style later) but somehow disoriented King Kobra’s fans and more traditional hard rock listeners.
However, the song provides variation to the album and I always liked it, even more the very rare ‘Home Street Home (Street Mix)’, the extended remix featuring some wild guitar solos included in this Rock Candy reissue as bonus track. 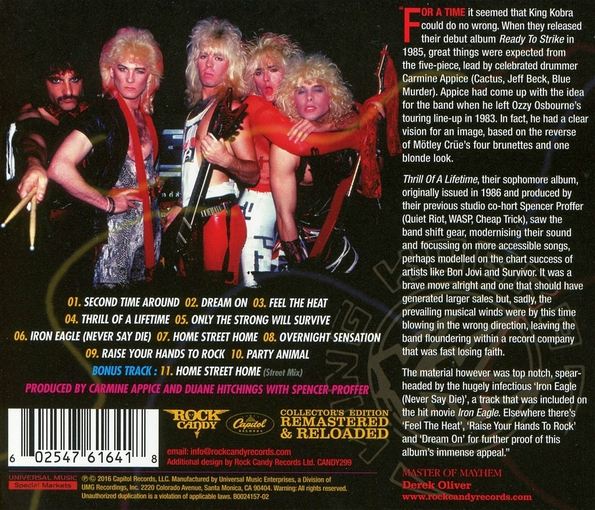 If you are looking for edgy melodic hard rock, grab King Kobra’s brilliant debut (presented Here), but if you’re as well a sucker for uber polished, fluffy, and even cheesy poppy AOR – read pure ’80s – then “Thrill Of A Lifetime” is a mandatory listen.
Perhaps not all songs are exceptional, but there’s many tracks which are the true definition of pure US AOR from the era.
In my book, this is A Must Have.