After the recent KING KOBRA remastered albums featured here, some of you asked for “Kollection“, a 2-CD release put together by King Kobra founder Carmine Appice few years ago.

The package includes the complete “King Kobra III” (appeared in 1988 and Out Of Print) completely remastered by Appice himself with the help of friend engineers, and a second CD full of B-Sides & Rarities, many of them previously unavailable in North America, plus the never released track “Subway”, featuring C.C. DeVille from the band Poison on guitar, a much sought after recording by King Kobra fans.

“King Kobra” III was originally released in 1988 via the small label New Renaissance Records, featuring new vocalist Johnny Edwards in the ‘hard to fit shoes’ of Mark / Marcie Free who quit the band a year before.
Edwards does a very good job, and there’s some killer, criminally underrated songs here in the vein of King Kobra’s first album or Quiet Riot. 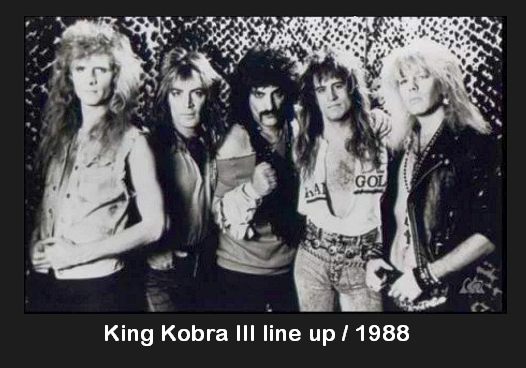 When “Kollection” was released some time ago I heard / read some comments that “King Kobra III” is not remastered at all here. Well, they must be partially deaf as indeed it’s fully remastered. I guess these people heard the digital files put online from some dubious source.
“King Kobra III” sounds fabulous with a punchy, bright remaster rich in high / bottom harmonies.
And the bonus disc includes solid tracks deserving to be listened, some featuring Mark / Marcie Free and others the very good Kelly Keeling (Baton Rouge) on lead vocals.

“Kollection” is a great opportunity to listen the very hard to find “King Kobra III” plus some rare recordings from the mighty King Kobra.
Highly Recommended

The Real one / You’ve seen it first here, at 0dayrox