This was requested by one of you; the return of FASTWAY after 21 years outta the scene with “Eat Dog Eat“, and this US Edition including a bonus track. Darn, listening to this baby again I almost forgot how good slice of hot classic hard rock it is.

Formed back in 1983 by Fast Eddie Clarke (ex Motörhead) and Pete Way (UFO), after enjoying success with albums like ‘Fastway’, ‘All Fired Up’ and ‘Waiting For The Roar’, the band ground to a halt in 1991.
“Eat Dog Eat” marks their first new studio album since 1990 and featured the remodeled line-up of Fast Eddie Clarke, drummer Matt Eldridge and former Little Angels & Gun frontman Toby Jepson.
Jepson has always been a superb musician and with Fast Eddie in inspired songwriting form, this is an impressive comeback that will be lapped up by old-timers and should win them plenty of new admirers along the way.

Fastway’s current incarnation takes helpings of classic hard rock beasts from the ’70s, a hint of ’80s Whitesnake, maybe even a little of Thunder’s spice, and serves it up with a healthy slice of Little Angels, all of this should be enough to satisfy the appetite of many rocking souls.
Hitting their stride immediately with the midtempo bluesy rocker “Deliver Me” it is clear this new incarnation of the band for the new Century is extremely slick, streamlined and bursting with confidence. There’s passionate vocals by Toby Jepson and a smokin’ guitar solo. 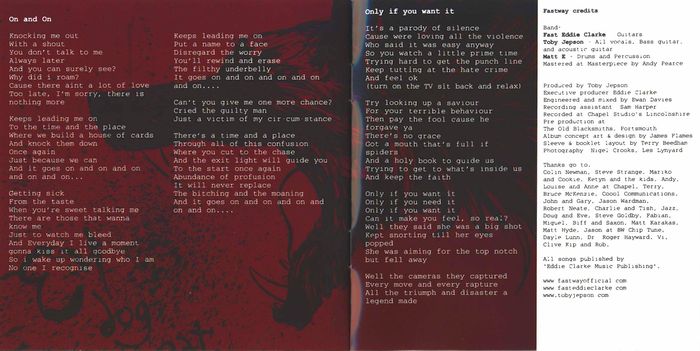 “Leave The Light On” has a memorable swagger that was a trademark of Fastway’s first era when they had considerable success with both the eponymous debut and ‘All Fired Up’. Eddie delivers a sharp solo.

“Loving Fool” is a great rocker with a catchy chorus and some ‘fast’ brilliant guitar lines, while “Dead And Gone” is a huge track featuring a heavy bluesier sound, rumbling bass lines and a great live feeling.
Fastway never was a fashion band. They were playing old-fashioned pure hard rock with attitude. Even back in his Motörhead days Clarke could always come up with a great melody as on the rousing “Who Do You Believe?”.

The slinky opening riff of “Sick As A Dog” sounds like it could have graced the band’s first albums, while a title such as “Love I Need” may suggest a ballad but the insistent, grinding riff plus Jepson’s call-and-response delivery equals another moody blues rocker with Clarke again serving up a tasty solo. One of the better songs on the album.
“On And On” ends the regular tracklist with some powerhouse drumming from the energetic Eldridge and more blistering guitar work, and this US version of the album includes the bonus track “Only If You Want It”, a groovy yet melodic hard rocker with an ’80s feel recalling Y&T best era. 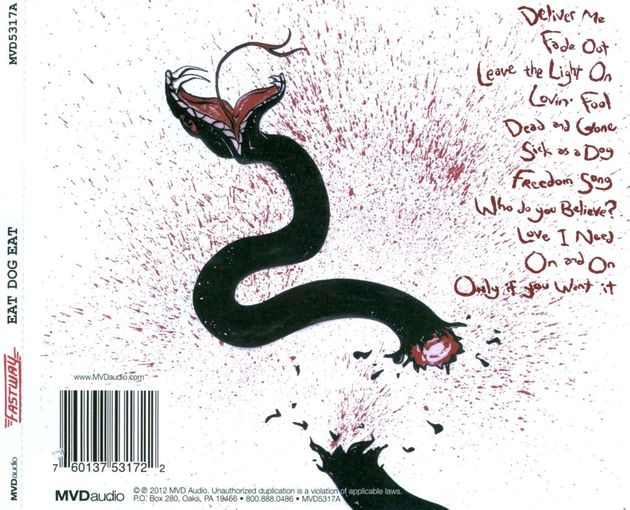 Fast Eddie Clarke returned with a vengeance; Fastway’s “Eat Dog Eat” really takes us back to the classic, basic hard rock, resting on the traditional British bluesy foundation.
Clarke is in top form delivering razor riffs and melting solod, and he’s lost none of his six string prowess. Jepson proves himself as a great musician for this style with his smoky, melodious tones perfectly suiting this collection of immaculately crafted rockers. Jepson also handled the excellent production sound, walking just the right line between gutsy & raw / clear & polished, and the songs themselves hit the spot with unrelenting accuracy.

“Eat Dog Eat” is a very, very consistent collection of top class, blues-infused hard rock. If you love the traditional, classic sound of the genre, there’s no doubt that you will enjoy this album with a big smile in your face.
Highly Recommended