If there’s something you can’t deny with Italian rockers CREAM PIE is their perseverance, now releasing a new album titled “No Secrets“. In the last ten years the band not only have played in every venue where they were given a place including UK, Germany, USA, etc, but also promoting every single they recorded.
Cream Pie submitted to this blog various singles / tracks in the last three years to be featured here, but as happens with many bands / records in our consideration, we thought the material was not interesting enough.
Well, we think it’s time to give Cream Pie a shot, because the band has grown in many aspects, feeling more confident and mature in “No Secrets”.

The album is based in Cream Pie’s most notable influence: ’80s glam metal some Scandinavian feel, especially Hardcore Superstar when it comes to adding metal to sleaze rock. But this time the guys add something different into a couple of songs.
Opening track ‘Downtown Pirates’ displays some classic modern sleaze metal riffs, but second song “Away From Me” shows us a darker side of the band’s music with some Crashdiet touches, while “Naked” add a more modern touch with clean, almost poppy verses. It’s a welcomed new side for the band.

Fans of ’80s US hard rock will love “Givin’ Up”, bringing Slaughter to mind, while “It’s Gonna Be Alright” has a bit of a Tigertailz, then “Fall to Rise Again” bring to mind the first Reckless Love.
“Friendzoned” is a cool colourful glam metal tune that will make you want to listen to it again just after it stopped, and you have an interesting slow track (not ballad) in “Monochrome” including acoustics into the mix and sinister guitar riffs.
If you need more comparisons, let’s say that “Disasterpiece” is another track that offers a new side of Cream Pie, more modern, something like Sixx:AM with a Scandinavian sound. 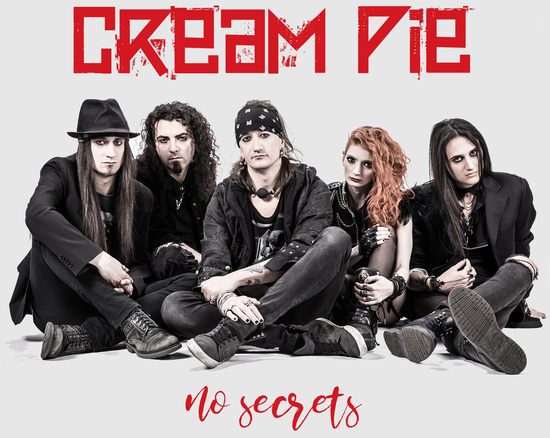 Cream Pie has grown a lot with “No Secrets”. Now the songwriting is varied, more complete, and while their sleaze foundation is still intact, the overall patina and several arrangements have been updated to a more contemporary, accessible sound.
A quite solid album where Cream Pie are showing that they are not just only a sleaze party act, but also a band trying to explore new musical horizons.
And I like what I hear.