Some time ago we already presented on the blog hard rock act BAND-MAID, and now the Japanese girl-band are releasing a new album titled “Just Bring It“. Last year the 5-piece not only toured all over the world including Asia, Europe and South America, but now the new CD is being published world-wide.

They first gained attention as little more than a gimmick, as the contrast between their hard hitting J-Rock / hard rock songs and their cutesy French Maid imagery became a talking point in the metal community.
However, they have the solid music to prove that they’re more than just a hoax, and in 2016 they signed an international deal with JPU Records.

“Just Bring It” gets off to a flying start with “Don’t You Tell Me” with groovy metal riffs and subtle keyboards driving forward the music in Band-Maid’s patented catchy-yet-heavy style.
The band have grown considerably over the 4 years they’ve been releasing music together with more complex structures working their way into the group’s music. Guitarist, backing vocalist and virtual band leader Miku Kobato is one hell of a songwriter, which you have to be if you’re releasing new music almost every year.

The pop melodies of Saiki Atsumi’s vocals are a perfect complement to these heavy guitar riffs.
But it’s impossible not to mention the inventive bass playing of Misa, who offers an extra dimension to the sound with creative and elaborated lines that sometimes almost feel like they’re playing the lead rather than simply holding the rhythm as most bass players are happy to sit back and do. Awesome playing.

On songs like “Take Me Higher!!” the band shifts seamlessly between hard rock riffs, classic heavy metal solos and modern metal breakdowns to create an entirely different beast. “Awkward” is another track in this vein but starts slowly, going full throttle in the second half.
Then you have the ridiculously catchy “Yolo”, while the oddly named “Ooparts” offers variation with its sweet rock & pop melodic line providing a nice balance in the sea of heavy hitting J-Rock and hard rock that dominate the album.

Occasionally Band-Maid throw in something different such as multi-harmony vocals, a flash of electronics or massive breaks which will throw you completely off your guard.
“Cross” offers plenty of this, with numerous stop n’ go, dynamic shifts, tempo changes and little subtleties that you may miss on first listen but keep coming back to and discovering more. 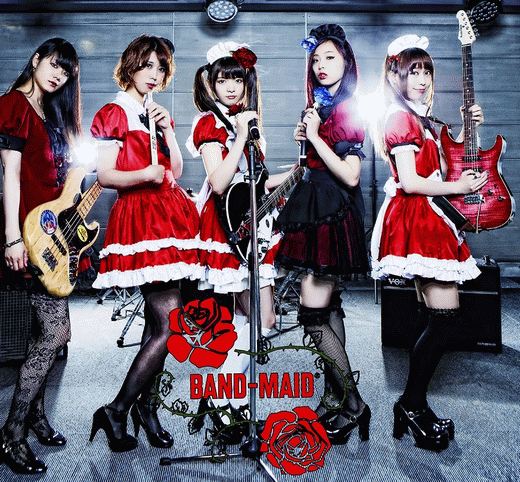 There has been some significant growth for Band-Maid since their first mini-album. They sound like a more refined unit on “Just Bring It” and their songs seem to have an added bit of polish on them.
This album makes a bold statement in regards to what kind of sound Band-Maid wants to be their trademark. The girls have gone into full “rock on” mode, you are not going to find anything resembling a ballad on “Just Bring It”.

If you have not had the opportunity to give this band a chance “Just Bring It” is an excellent entry point to get into Band-Maid.
Don’t be fooled by their innocent image. The ingenuous two girls on the album cover in fact depicts a human skull (Def Leppard already did this in Retro Active).
There’s lots of swaggering riffs and huge choruses here, while the five-piece’s musicianship shines through in all manner of guitar pyrotechnics and radio-friendly bombast.
Very recommended, compelling album.