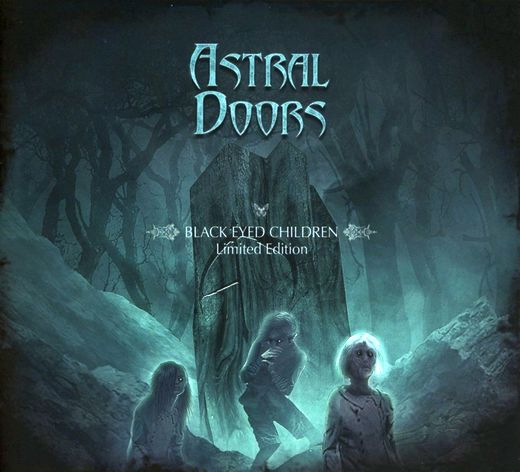 With their 8th full-length studio album, “Black Eyed Children” (via Metalville), released today April 28th, ASTRAL DOORS is a proof that even the most gifted, talent-rich musicians continue to get better with time, and after 15 years together, there are no signs of decline in the quality of music they create.
And the music these Swedes create is a DIO-worship to new heights. Yeah, “Black Eyed Children” is classic, traditional metal in a Ronnie James Dio vein.

Hailing from Borlänge, Dalarna in southeast Sweden, Astral Doors is comprised of Nils Patrik Johansson on vocals, Joachim Nordlund on guitar, Mats Gesar on guitar, Ulf Lagerstroem on bass, Johan Lindstedt on drums, and Jocke Roberg on keyboards, and plays what once was considered traditional Heavy Metal, back when Heavy Metal was the “cash cow” of the music industry.
Being an elite-talent driven, ‘thinking man’s’ style and because it’s becoming increasingly different than most contemporary formats of Metal, most would likely label their music a bit more on the Power Metal side.
Whatever you want to label it, this is the sound that Heavy Metal was born of.

The cornerstone of a band is most often a charismatic lead singer, and Nils Patrik Johansson is extraordinary. Carrying the torch for Astral Doors, as well as Lion’s Share and many other bands he is part of, Johansson has everything needed in a front man; powerful DIO-esque vocals, the stage presence of a legend, and a mastermind of a songwriter.
The twin guitars of Joachim Nordlund and Mats Gesar are heavy, thick and masterful, resurrecting old school power chords and guitar interludes with precision.

With all of that being said, talent will only get you so far in any form of rock n’ roll, so writing great songs is the only way to be elevated to ‘the cream of the crop’ status and Astral Door’s songwriting prowess is where this band truly shines.
“Black Eyed Children” is some seriously profound stadium-ready heavy rock from, what I believe to be, one of the most talented, underrated bands currently playing Heavy Metal.
There is no question that these guys possess a wealth of essential elements that the forefathers of traditional Metal built into the foundation of this genre and they display this authenticity with masterful ease.

Soaring vocals, guitars that ebb and flow between a wall of power chords and lower tones with a bluesy foundation, and a thunderous bottom end are what drives each and every track on this terrific album.
Extremely clean, chunky chords steeped in heavy metal history; drums, thick and full of punch; singer Nils Patrik Johansson’s ever-aging Dio-isms; ‘We Cry Out’ certainly sounds like it has the makings of a great opener.
Although there are no weak tracks found anywhere here, ‘Good vs Bad’, ‘God Is The Devil’, and ‘Lost Boy’ are standouts that really touched me, with my two favorite tracks being the atmospheric and magical ‘Walls’, and the edgy, classic ’80s guitar-filled ‘Die On Stage’, a killer tune. 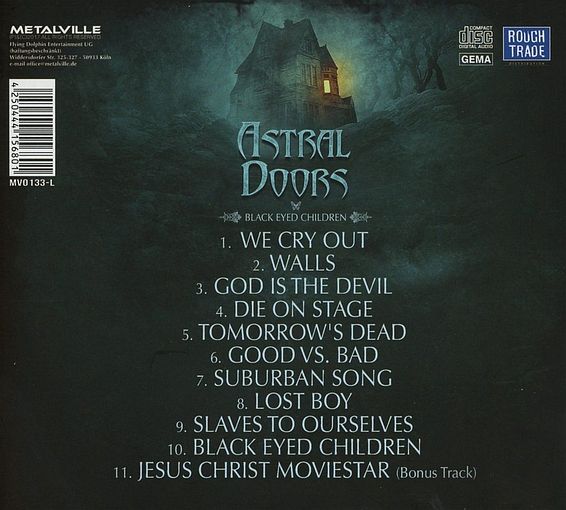 In a time when most new bands are straying into the saturated and trendy sub-genres that highlight the many different styles of metal screams and growls, Astral Doors continue to stay true to their classic Heavy Metal roots and by doing so, honor the Metal Gods that so deeply influenced their souls.

With the many different ranges of Metal being released these days, “Black Eyed Children” is such a breath of fresh air that will have you raising your horns high in honor of all that is traditional, classic metal. This new material, as a whole, is as good as I’ve heard from this extremely gifted band and only raises the bar even higher.
This Limited Edition Digipak includes the bonus track ‘Jesus Christ Moviestar’ which somehow reminds me of Jorn, and the album artwork is slightly different.
Dio / Black Sabbath / Vandenberg’s MoonKings (and alike) fans, this is a must have for you.