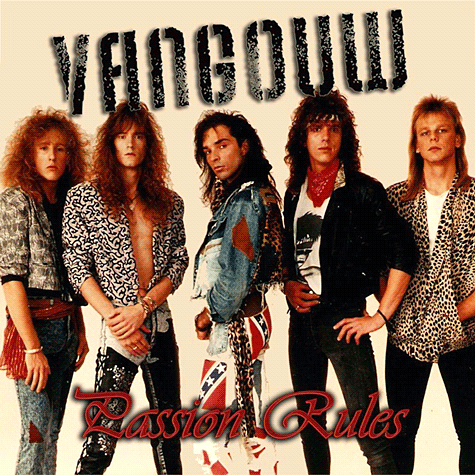 This was requested by one of you; melodic rockers VANGOUW limited edition remastered CD “Passion Rules“.
After Dutch vocalist Gerard Vangouw (at the age of 17) recorded two albums with metal band Martyr which were very successful in the Netherlands and German metal scene in 1987, the young vocalist choose to enter the world of AOR / Melodic Hard Rock music.
However, he still didn’t have a band. First one to approach was virtuous guitarist GG. Soon, drummer Han Neijenhuis, keyboardist player Gertie Veldkamp and young bass player Pascal Groenen joined in, and VANGOUW born.

The band toured extensively the Netherlands during the next year, and recorded 2 songs: ‘Simonai’ and ‘New Horizon’, trying to get an entry with a record company.
After some line-up changes, new songs like ‘Not The One I Love’ and ‘Come My Way’ found their way into a new demo, and the same local label booking Golden Earring, Sleeze Beez and many dutch bands invited VANGOUW to sign in a contract.

The group recorded several tracks for an upcoming debut album. However, the label wasn’t satisfied with the two ballads they had. Vangouw went into their rehearsal studio and wrote around twelve ballads and none of them caught the record company approval. Finally, the band and the label split up.
For 2 years VANGOUW tried to release all their recorded music with no luck, and by 1992, called it a day as a band.

After 25 years or so, Gerard’s dream finally came true.
All the original VANGOUW recordings tracked down between 1988 and 1990 were released for the first time on CD in this “Passion Rules”.
Produced by names such as John Sonneveld (Golden Earring, Sleeze Beez, Anouk, Valentine, etc) and Alfred Lagarde (Highway Chile, TOTO, etc), finally these tracks were remastered to get the best audio quality possible.

“Passion Rules” reflects one of the best Holland’s AOR groups from the Eighties. It contains 10 very diverse and original tracks (plus one live); the best of Vangouw from ’88 till ’92. Great harmony vocals were one of the secrets of this great band of youngsters.
“And Your Love’ is a bombastic AOR with a memorable chorus and some wonderful keyboard and guitar lines. ‘Leave The Night Behind’ is another great tune with some Scandi-AOR influence and a great solo.
They have re-worked Fleetwood Mac’s ‘Go Your Own Way’ into a pounding rocker with big guitars and strong keyboards.

More acoustic guitar and layered synths precede the big power ballad ‘When You Think Of Me’, a classy number guaranteed to weaken any AORster at the knees. Pascal Groenen provides the funky bass lines on ‘New Horizon’, and along with the gated drum sound, this one lives in the 80’s for sure.
‘Simonai’ is another true ’80s melodic rocker and a contender for the best track on the CD, an evergreen semi-ballad with a bombastic pomp approach. With a title like ‘Make Up In The Morning’, you’d be forgiven for thinking this might be a teary-eyed ballad, but no… there is 1st Avenue and Javan styled pomp of the first order. Again, big keyboards and slice/dice guitar work.

One of my favorite tracks is the rather racy workout that is ‘In The Night’. Again, the reference point for me would be outfits such as the aforementioned Javan, possibly also Rescue. The song gallops at a frantic pace.
‘Not The One I Love’ is a harder rockin’ effort, more in keeping with the styles of Zinatra or Glory. So too ‘Come My Way’, with its heavier guitar sound.
The last track on the album is a live cut.. ‘Lasting Love’ recorded live in Amsterdam back in the day, is a mid-paced affair bordering on the point of being a sing-along ballad. The echoey sound of this song doesn’t help in terms of the audio quality, but you get an idea as to how good these guys were, the vocal harmonies are top notch.

It’s truly fantastic to be able to enjoy these songs into a single CD album after so many years.
And unlike some other re-released albums from back then, this one could have been yesterday’s release, that’s how timeless some of the songs sound.
Unfortunately “Passion Rules” had a really short shelf life, as only 500 copies were done and exhausted soon.
A collectors piece.