Today March 17 is the day for the CD debut of virtuoso guitarist SAMMY BERELL, titled “Passion Dreams“. This Swedish shredder is called to be the successor of the loved / hated but never ignored Yngwie Malmsteen.

Let’s put things clear from the start: Sammy Berell and “Passion Dreams” are pure clones of Yngwie’s style of playing an his first four – and most successful – solo albums from the ’80s / early ’90s.
Yeah, you can’t re-create talent, but you can take a style/genre and make it your own.
That’s what Sammy Berell has done here; this is what fans of true neo-classical want, and like Tommy Vitaly (recently featured on these pages), Berell has released the album that Yngwie should had recorded last year.

You can hear Berell’s other influences as well, but basically, this is pure Yngwie / Rising Force kinda stuff, and believe me, “Passion Dreams” is a true melodic, guitar driven hard rock / metal gem.
The sound / production is fabulous – handled by expert Daniel Flores (The Murder Of My Sweet, Mind’s Eye, Saviour) who also play drums, and co-produced with Berell.
They even secured the services from 2 of Malmsteen’s most celebrated vocalists; the great chameleon Göran Edman who performs on two tracks, and terrific shouter Michael Vescera who sings the remaining songs.

The CD kicks-off with the amazing ‘Judgement Day’, a track that could easily appear in any Malmsteen’s early albums; neo-classical melodic metal with stunning vocal lines, all that ’80s vibe on it and, of course, some excellent guitar licks.
‘Midnight Flyer’ is much more melodic hard rock oriented and I can see why they have chosen Edman for this one. A track with a huge harmony and a killer chorus.

There’s a lot of hard rock groove in ‘Little Sinner’, then on title track ‘Passion Dreams’ melody return again with some AOR-ish pinch added to the chorus providing an extra flavor making this song one of the highlights.
‘Star’ indeed shines with its killer riffs and strong vocals, whilst ‘Sacrifice’ is just another neo-classic feast full of shred and ’80s magic. 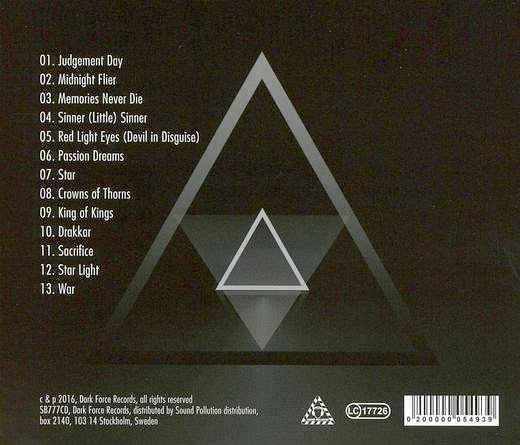 For many, Sammy Berell will be just another Malmsteen clone, but meanwhile Yngwie continue recording the type of stuff he’s doing nowadays, I want Berell to keep creating albums like this “Passion Dreams”.
A passionate album indeed, made in the ole-fashioned way. And I love it.
HIGHLY Recommended