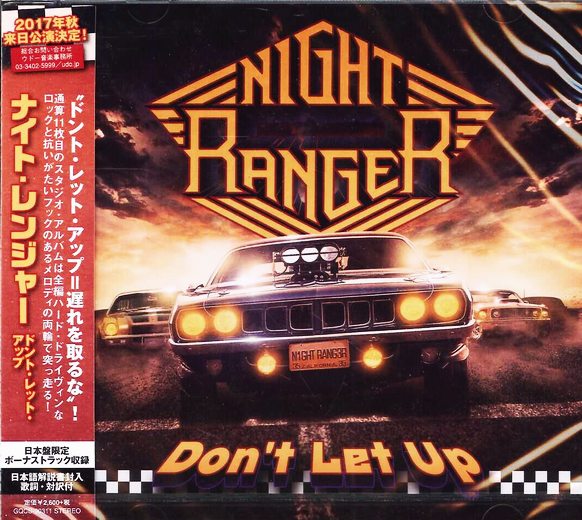 Frontiers Music Srl will release “Don’t Let Up“, the new studio album from NIGHT RANGER, on March 24. In Japan, the disc appeared just few days ago, featuring a bonus track.
The disc will be available in both a standard and a deluxe edition including a bonus DVD.

Age is just a number they say. You’re never too old to rock ‘n roll if you ‘have it’ in the blood. You can’t teach an old dog new tricks. Let’s just skip that one. Night Ranger, the music video kings of the early Eighties and one of the defining melodic hard rock bands in the genre’s history, have been recording and performing for 35 years.
Wow. That’s historic, considering the half life an average band.
For this anniversary Night Ranger drops their twelfth album, “Don’t Let Up”. Something of a message in that title? I think so.

This new Night Ranger album works from the usual musical elements: tight and catchy melodies, twin guitar harmony with ripping leads, hooks in refrains and riffage, some sweet vocal harmony, and smart rock groove from the rhythm section. Then they drop all these things in AOR arena-ready package they’re famous for.

Heavy, often swift, rockers come with ‘Say What You Want’, ‘Day And Night’, and ‘Running ‘Out Of Time’, by example. Starting with an acoustic guitar line, ‘Truth’ rocks but with a more mid-tempo movement and offers some signature Night Ranger vocal harmonies. Alternatively, some latent blues groove informs the guitar lines of ‘(Won’t Be Your) Fool Again’.

Returning to the acoustic side, there’s a glorious melody in ‘We Can Work It Out’, and ‘Nothing Left Of Yesterday’ is simply delicious Night Ranger. The former turns largely on the acoustic guitar and vocal harmony arrangements, and will hook you with the pleasing chorus. Similar, the latter song juxtaposes calmer acoustic moments with larger and deeper riffs and groove, and the vocal arrangement is bolder.
The Japanese bonus is an acoustic version of ‘We Can Work It Out’, this time fully acoustic and with a true American classic rock feel all over it. 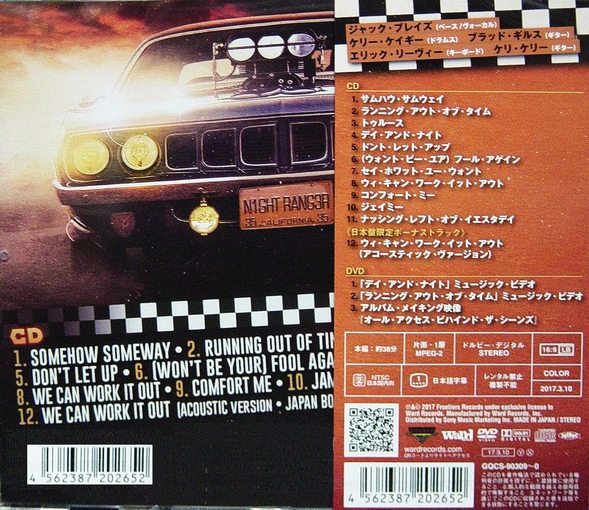 Again, almost by textbook definition, Night Ranger is a classic, feel-good melodic hard rock band with an AOR heart, and with “Don’t Let Up” they deliver the consistent rock and roll magic they’ve been doing for 35 years.
Night Ranger 2017 is still rocking America, the World, and beyond… Don’t let up, fellas.
HIGHLY RECOMMENDED