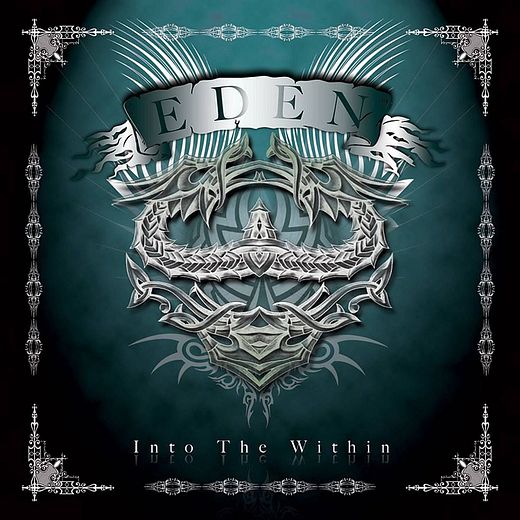 EDEN (from UK) is built around the talents of great vocalist Nick Workman (VEGA) and Vince O’Regan (BOB CATLEY, LEGION). “Into The Within” is their last album, and while the Eden never disbanded, judging the success of Vega I can’t see a new album coming shortly.
So Z-Records decided to reissue “Into The Within”, an album that certainly deserved more attention back in the a day. Workman recorded his parts few weeks before he joined Vega.

Eden’s music is traditional melodious hard rock wrapped with tight harmonies and busy musicianship, with a vaguely proggy edge. The album boasts plenty of variety, ranging from commercial hard rockers akin Kick (Workman’s previous band), some Bob Catley, Ten, a pinch of Led Zeppelin, and of course a bit of Vega.
Needless to say, the big selling point on “Into The Within” for me is Nick Workman’s vocals.

“Anything Goes” opens the disc as a freight train at full steam, with a powerful rhythm section but a melodic chorus. This track reminds me a Queensryche song, their more accessible commercial side. “Revolution Man” is strongly bluesy based, with a melodic metal solo. Strange and a bit odd, but original for sure.
But then the album suddenly springs into a new direction with the title track. “Into The Within” boasts some beastly guitars and a huge, almost melodic metal chorus. Very good indeed.

“Here Today (Gone Tomorrow)” is a cool upbeat entry with some stunning progressions. There’s lovely keyboard lines with a clear ’80s feel in there, but the result is remarkably up to date and classy.
“Strong” is a winding, mellow, slightly progressive piece that really grows on you. “Lay Me Down” opens with a Jimmy Page riffin’, and while the spirit of the song takes a while to get going, when boasts the excellent chorus it really does.

The hard rocking “All That’s Bad For Me” takes the album up a notch or two. It’s a really interesting track with a bunch of leftfield rhythms that make it achingly catchy. Workman’s shine at the mic, very solid.
“Once In A Lifetime” is a very good Skid Row-alike power ballad with plenty to enjoy, from the vocal verses to the overall atmosphere. Another blink ’80s.
“Fire Me Up” has a cool vibe and very nice rhythm guitar, one of the more ‘Americanized’ tracks on the album, especially on the catchy chorus.

“Into The Within” is a very fine album with a classic British hard rock style as pennant, but spiced with other melodic flavors to make it more interesting. Maybe the mix of influences looks strange at first glance, but the album is homogeneous and solid.
There’s strong songs and solid performances from all involved – being Nick Workman’s the central attention, and as a whole finely recorded & produced.
Eden waters from different fountains, but sounds like no-other. And this reissue it’s a really cool opportunity to check what was doing the talented Workman before joining Vega.