Finland’s BROTHER FIRETRIBE, the five-strong outfit that we are never sure will be able to make a ‘next’ album thanks to the demands of Nightwish placed upon guitarist, Emppu Vuorinen, have found a slot in the diary, cleared the schedules, stepped up to the plate and recorded their fourth album “Sunbound“, in this Japanese Edition featuring 2 bonus tracks.
And what a great AOR album it is.

While Brother Firetribe have been often compared to Survivor (or copycats), they’re in fact strongly influenced by all ’80s US AOR. Perhaps the comparison resides on Pekka Heino (Leverage) vocal tone. He sounds uncannily like Jimi Jamison, delivering the catchy choruses with panache and aplomb surrounded by the ever-present keyboards of Tomppa Nikulainen.
But don’t be fooled, what Brother Firetribe bring to the table as well is modern Scandinavian melodic rock with Vuorinen’s signature guitar work that set the band apart from so many modern pretenders.

Opening with an instrumental track, the album immediately brings to mind that arena sound that wouldn’t be out of place on the soundtrack of a certain boxing underdog franchise. It leads immediately into ‘Help Is On The Way’, a track that harks back to the style that drew people to the band when their ‘False Metal’ debut was released back in 2006. The solo from Emppu reaffirms why the band present a different, original and modern take on the genre and as it merges into the lick that opens future single ‘Indelible Heroes’ it’s clear, only 2 full songs in, that the album is going to be a winner.

If the aim is to reinvigorate and re-energise a musical style that contains hooks galore, massive melodies, vocals that soar so high they leave you gasping for oxygen, then Brother Firetribe succeed.
“Follow your heart and relive the taste of a champion”, so sings Pekka on the lead single. If Hollywood ever decides to remake the aforementioned boxing franchise, they have the lead single ready and waiting to go. The song has already been used as the theme for a major Finnish advertising campaign and it’s no surprise, it’s the sort of song that only needs 30 seconds to bed itself into the brain. 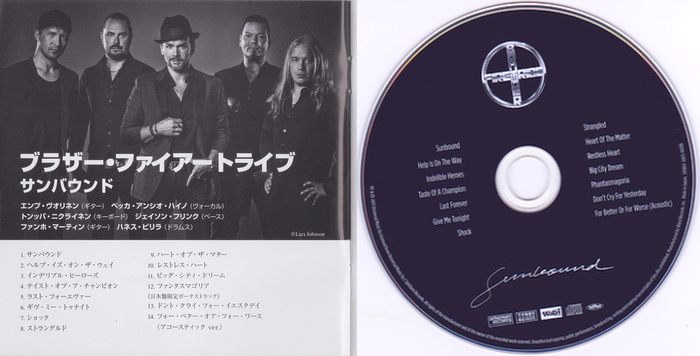 ‘Shock’ with its anthemic chant along chorus should become a highlight of a live set if and when we get to see the band perform again. Prolific touring is not their strongest attribute but when one of you is the lead guitarist in Nightwish, well, it’s not surprising.
‘Strangled’ also delivers a powerhouse track with Pekka’s vocals really driving the song from start to finish.

Even the song titles remind us of a time when AOR ruled the airwaves and bands like Foreigner and Survivor were commonplace on the radio; ‘Heart of the Matter’, ‘Restless Heart’, ‘Big City Dream’ all suggest people moving to L.A. to live the West Coast dream. It’s sun, sea and surf, pretty good from a band whose country is swathed in darkness for half the year.
They save the best for last though and with ‘Phantasmagoria’, they deliver five minutes of epic melodic rock, opening with a beat that feels like it could be the opening music to ‘Top Gun II’ should it ever get made.

This Japanese Edition worth the investment as the band offers not one but two bonus tracks; the extremely melodic / keyboard driven ‘Don’t Cry For Yesterday’ (also extra track for vinyl LP limited version), and acoustic version of ‘For Better or for Worse (acoustic)’, a track taken from Brother Firetrive previous album Diamond In The Firepit but now completely re-worked with unusual percussion.

“Sunbound” is a superb return for Brother Firetribe, a marked improvement over the previous release and an album that delivers everything we have come to hope for from the Finns.
And that is pure ’80s AOR with a modern approach, done like few can do it in 2017.
Mandatory Listen