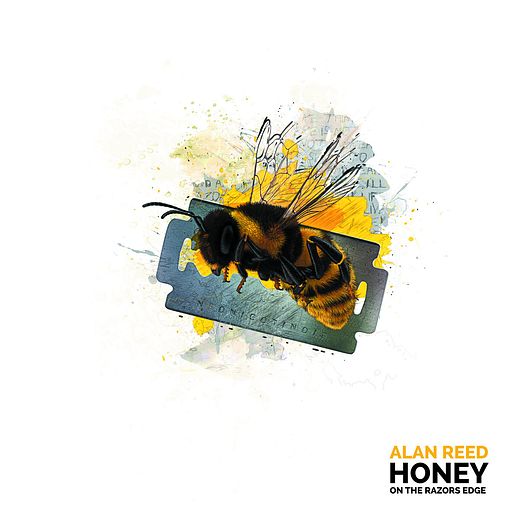 This is the second Alan Reed album as solo artist, the first being a relaxed piece of music but this “Honey On The Razor’s Edge” has a grittier, more assertive edge reminiscent of his work with his previous band and some kind of poppy, light progressive melodic feel.
I have to admit that whilst I like Alan’s first solo outing it felt like it didn’t have his full confidence and was maybe reflecting in his situation at that time.

With this new album there is no hesitance and it’s straight in with up-tempo rippling keyboards and electric riffs on first track ‘My Sunlit Room’. Alan sounds in fine fettle blowing away any faint concerns as his vocal pipes dance a highland fling through the melody in this rousing starter that crashes to an end.
‘Cross My Palm’ features some nifty guitar soloing from Jeff Green and the nice keyboard lines of Mike Stobbie (ex Pallas) building to a crescendo finish. Another belter.

Then on ‘Razor’ there’s a more commercial approach, and call me nuts, but I found this track reminiscent of Robin George’s Dangerous Music era. But Alan adds his familiar style and harmonica flourishes (courtesy of Steve Hackett) which in fact almost sounds like a guitar solo.

‘Leaving’ also has some little poppy melodies wrapped with acoustics, including an appearance of Lazuli’s Claude Leonetti with that beautiful sounding instrument called Leode.
I must also point out that Alan has an enviable trio of fine female singers assisting him on this album in Magenta’s Christina Booth, Harvest’s Monique Van Der Kolk and Weendo’s Laetitia Chaudemanche adding the cream on top of some tracks here, giving him vocal riches beyond avarice.

Alongside Alan’s solid vocals, on ‘Other Side Of Morning’ Stobbie gets to bare the whites of his keyboards as stalwart drummer Scott Higham more than ably keeps the rhythm and beating heart of this track pumping, as he does throughout the album. This, the longest track on here builds to a fevered climax that is completed with one last gasping ‘stay’.

Alan is a gifted poet and romanticist, with the ability to touch the hardest of hearts, as on the penultimate track ‘Used To Be Someone’, recalling a love lost. With a beautiful instrumental introduction, tinkling ivories and guitar loops sway like smitten lovers on the dance floor in time to Alan’s lyrics. For me he never sounds better than on tracks like this, as the emotion he injects into his voice feels so genuinely heartfelt.

“Honey On The Razor’s Edge” is an album where melodic poppy progressive tunes dance a merry jig with strong rock forces, and Alan Reed has surrounded himself with an array of accomplished musicians to enhance the songs pushing him firmly to the fore among his peers.
Strongly recommended