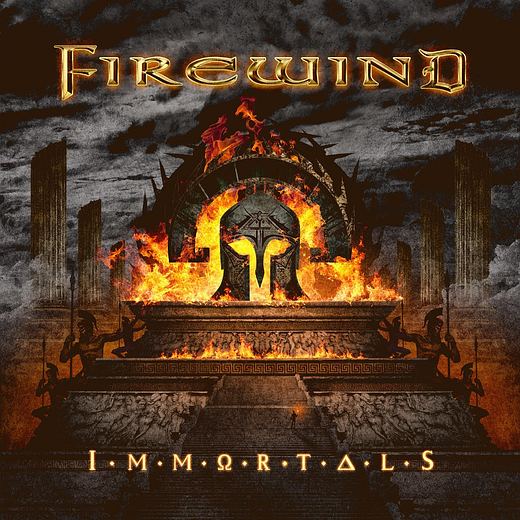 FIREWIND, perhaps the most renowned melodic power metal act nowadays, with guitar phenom guitarist Gus G. at the helm, make their comeback with their eighth album titled “Immortals“. This new recording reunites the band with vocalist Henning Basse (ex Metalium, Sons Of Seasons) who filled in for 2007 Allegiance tour.
Additionally, this album finds Firewind working with outside producer, the generally genius Dennis Ward (Unisonic, Khymera, Sunstorm), who also helped to co-write the album with Gus.

“Immortals” is also the first concept album for the band. It explores a subject of history familiar to Greeks, the Battles of Thermopylae and Salamis in 480 BC during the second Persian invasion of Greece.
Musically, “Immortals” is largely epic and ambitious premium melodic power metal lit up by Gus G.’s enormous riffage and blazing solos. He’s easily one of my favorite metal guitarists, simply because creates with melody and harmony in his riffs, lines, and leads. Gus is not necessarily the typical guitar wizard, lying down oodles of neo-classical widdling. No, while he can do that, his leads are more varied ranging from rock to metal stylings.

While many of the the songs within are headlong rushes of gallop, putting the racing speed into Firewind’s power metal, long serving keyboardist Bob Katsionis returns to add some synth sparkle and atmosphere, yet also dueling with Gus G. in solos.
Having a bit of Bryan Adams coarseness in his voice, Basse still sings melodic, easily swinging from rock to metal style. He’s assertive, but always in control.

To mention just a few songs, for pure bombastic you have it at the start with ‘Hands Of Time’ and ‘We Defy’, but also later with ‘Warriors and Saints’. But also expect some variation and intrigue like powerful synth start of ‘Back On The Throne’, before the power metal begins with a rush of riffage. Another is ‘Live and Die By Sword’, where acoustic guitar and light vocals begin the song, again, before steering to the gallop. Similar is the metal anthem ‘Lady Of 1000 Sorrows,’ having a sweet start lead by both light guitar and synths, and Basse showing some gentleness in his voice. The song swells and rises within to a crescendo and offers a memorable chorus.

Essentially, “Immortals” is classic Firewind: epic, bombastic, and damn entertaining melodic power metal.
By the hand of talented Dennis Ward behind the desk who has provided a polished melodic sound, the group has created their most commercial, accessible album to date.
Welcome back. Easily recommended.