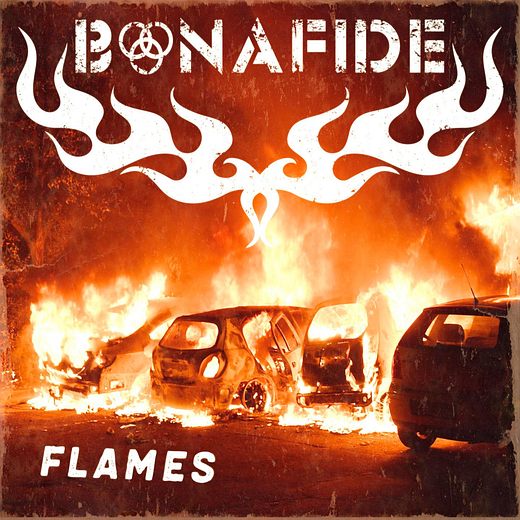 This year Swedes BONAFIDE celebrates their 10th anniversary with the release of their new full-length album “Flames“. This is one of the hardest-working bands in the business constantly touring across the UK and Europe, and the band make sure they get as much distance possible out of their material.
On the other side of that coin, you wonder how they fit in studio time with such a busy schedule.

Bonafide has always stood with their boots deeply buried in the classic rock and roll mud, and “Flames” stay faithful to that. But seems this time the guys decided to add some interesting variation, combining instant-fun rockers with more elaborated classic rock inspired melodies.
“Flames” is indeed a flammable album that sparkles and sizzles, filled with plenty of fat riffs and boogie rock inspired by early AC/DC and the best of the Seventies hard rock but with a modern, punchy attack. Think Krokus meets Airbourne with a classic rock bluesy groove.

Hardly innovative, but this is classic rock n’ roll when it is at its best, and Bonafide know their craftsmanship. This new record showcases a vital rock band plenty of spirit, whose title, “Flames”, makes the album justice.
Talented Pontus Snibb, singer and frontman, welcomes us with a ‘Good afternoon’ and then he kickstart the rock and roll machine with the track “Back in the Flames”, followed up by “Smoke and Fire”. Two tracks with plenty of energy which sets the tone for the album and summarize the band, pure rock ‘n roll with tons of energy.

This is rock n’ roll as escapism, the way it used to be. On “Power Down” you can almost see Snibb racing out on stage to play it with fists pumping – this is glorious.
They keep rocking with the kick ass “Keep A Safe Distance” and “Gotta Go”, the latter with some Led Zeppelin on it yet filled with Bonafide’s trademark groove.

That’s not to say, however, that “Flames” is a merely brainless full-on riff monster. These boys are far too savvy for that.
Just check “Written In Stone”, with its superb use of backing vocals and its countryfied stylings, it’s almost what Credence Clearwater Revival would have done if they’d been a hard rock band.
Additionally, there’s plenty of reason to think that Bonafide might be one of the finest retro themed rockers we have. They are steeped in it too. The Stones-y “Flipside Groovin’” proves that: “The b-side is where the magic’s at/ a different style and I like it like that” sings Snibb, and you know what? We were all like that once.

Some of us still are. And some that are form bands as a good as Bonafide. As they end this record with the wonderful ballad “Under Your Spell” which finds some real soul-filled goodness in its work, there is every reason to suppose that this band’s next ten years could be even better than the first.

“Flames” might just be their best album to date. As they continue to do things in their own way, Bonafide ensure they provide genuine rock and roll, taking aim at those who can’t walk the talk and the clichés of rock with songs like “Smoke and Fire”.
The music may stay the same, the quality ever-consistent but it’s blues and soul-drenched hard rock for the denim and leather brigade. The sort of rock that has outlived every fad the music industry has thrown its way and somehow still survives.
This baby rocks, and rocks hard.