Near to celebrate their 30th Anniversary, cult German rockers AXXIS are releasing a new album: “Retrolution“. The idea behind the album title is a wordplay on retro and revolution, bringing the old school influences back with a modern twist, but done the AXXIS way…
The band have been around for nigh on three decades, varying their musical styles here and there, but never loosing their true sound. The roots of AXXIS have been firmly planted, and their loyalty to the fans is second to none.

Classic melodic metal always has been the core of AXXIS’ music, spiced with hard rock groove and melodic choruses.
However, “Retrolution” is mostly inspired by traditional hard rock – now often called ‘classic rock’ by general music press. The 13 tracks have their own identities and in someway, depict different historical rock sounds and eras. I can hear some Deep Purple, Led Zeppelin in some tunes and some ’80s hard rock sounds in others.
Some of the tracks almost transport me back to a certain point in my life just with the atmosphere the song projects.

It’s the two main men Bernhard Weiss and keyboarder Harry Öllers that are mainly responsible for the band’s sound, a mixture of strong vocal lines and great keyboard sounds, but also guitar and riffs doesn’t get too short.
In fact, the band are presenting a new guitar player on this record, Stefan Weber. I can honestly say that he’s a massive asset to the band, an absolute powerhouse six-string player. I’m not sure how to define his style, but he’ the perfect blend of riff orientated, groove, power and outstanding leads.

In general, AXXIS songs are based on a positive vibe. I don’t want to use the term ‘happy metal’, but these tracks can turn dark days into a sunny time. This is what we know from their earlier albums and it’s also “Retrolution”s biggest strength.
Talking about the title – it is gambling with words, since there is ‘retrospective’ included as well as ‘revolution’, both terms describing the current situation in metal with e.g. a revitalisation of vinyl that takes place right now. So, this is for sure ‘retro’, but for the CD / mp3 generation it’s a kind of ‘revolution’ too.

The five-piece from North Rhine-Westphalia starts the record with “Burn! Burn! Burn!” which is a moderate paced melodic metal tune built of a strong bassline and a cool groove. “All My Friends are Liars” is the next tune and it comes with all Axxis trademarks. Great hooks, meet a well-done melody and rocking guitars, things that also are the foundation for “Dream Chaser”.

Bernhard Weiss and his gang unveil their classy origins with uptempo smashers like ”Rock the Night Away”, a hard rocker full of fire with a very ’80s feel.
To round of the entire spectra of AXXIS music the band added a ballad called “Queen of the Wind”, not too slow, more a midtempo rocker crafted in the way many Germans bands did in the past (read early ’80s Scorpions). 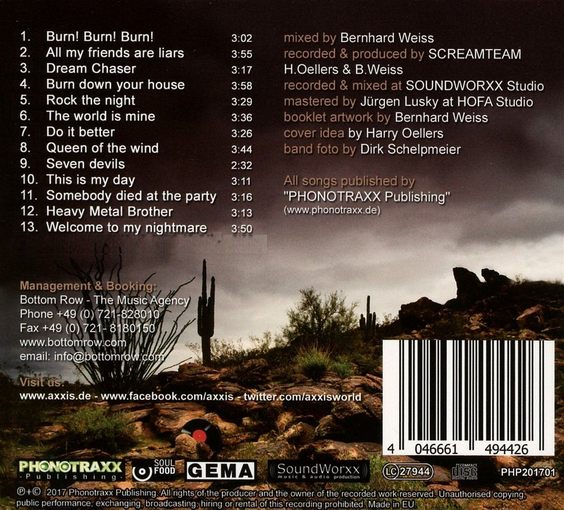 All in all I must say that this longplayer contains everything you want to hear from a classic hard rock band inspired by the glorious eras.
AXXIS is in business since many years and they are still burning for what they are doing – classic stuff that’s catchy and heavy.
“Retrolution”, song-wise and in terms of sound it’s more of a back to the roots, but without repeating themselves. I guess the easy way of explaining the album is: ‘a solid ball of rock‘.
Great band, great album, great passion.
HIGHLY Recommended