One of the Rock And Roll Hall Of Fame’s newest inductees, ACE FREHLEY, is unleashed this rocking new album titled… “Space Invader”. Yes, not only the title and the album artwork has a nod to his KISS years, but also the music inside.
This Deluxe Edition includes two bonus tracks.

The first thing you realize listening to the title track which opens the CD is that this could well be a track from Frehley’s legendary 1978 solo album. Despite or maybe because of all the space-age technology available, Ace you see is still stuck in a time warp, and this is the best thing about this album. It’s pure late seventies / early eighties.
“Gimme A Feelin” that follows has that trademark bombastic riff, a rough but charming vocal and slightly awkward lyrics that were always a huge part of Frehley’s boyish charm. When you add to that a ‘could only be Ace’ solo it’s a track that’s ‘perfectly imperfect’ like all of Ace’s best numbers.

“I Wanna Hold You” is a cool track that gives Ace another card in his deck of tricks. The song has a playful melodic rock sensibility without losing the edge that his voice and guitar lend to virtually every track in his catalog.
“Change” has a meaty riff that starts the track, but the chugging rhythm underneath the vocals adds depth and grit to the track that makes this a bit heavier than other tracks here without deviating from Ace’s signature sound.
“Toys” rides over a groovy bluesy riff that offset the chunky guitar parts in the verse. The vocals and lyrics are all Ace. The tempo and mood of this track remind me of the song ‘Dolls’ from his first post-Kiss solo disc, 1987′s Frehley’s Comet.

“Immortal Pleasures” is a different track from Ace standards that features a muted guitar line that adds depth to the song, especially once the vocals kick in and give the song an identity. “What Every Girls Wants” is a return to a sound and era for Ace. The feel of this track sounds like a riff he would have constructed in his formative Kiss years, while adding the experience of being a seasoned solo artist who has developed his own sound.
“Reckless” plays off of other tracks on this disc, while adding a playful vibe from earlier Frehley gems. This song helps tie pieces of Ace’s past with the present, and hopefully the future.

“Inside The Vortex” gives all Ace fans exactly what they are looking for: tight vocals and tighter guitars. The drumming and bass on this track are really hard rockin’ without bringing the vibe of the song down.
“Past The Milky Way” is reminiscent of his 1978 solo album, in that it breaks the mold of what is expected from him, but comes off as only an Ace Frehley track can. The chorus and bridges are chock full of guitar fire that duet nicely with his vocal.

“The Joker” is an interesting take on the Steve Miller track. Although cut from different clothes, you see how adaptive Ace and his playing can be in creating his own spin on an all too familiar track without totally changing it.
“Starship” is a good instrumental from Frehley that brings all of the facets of this disc and his career together in a cool 7:00 opus. The use of effects and his playing harken back to ‘Fractured Mirror’ while updating that groove and feeling to 2014 with this song. The track is a bit heavier, but reminds us why we loved Ace in the first place.
This Deluxe Edition includes two bonus tracks; a Radio Edit of “Space Invader” which I think has been slightly re-mixed, and a worthwhile ‘Explicit Version’ of the catchy single “Gimme a Feelin'”. 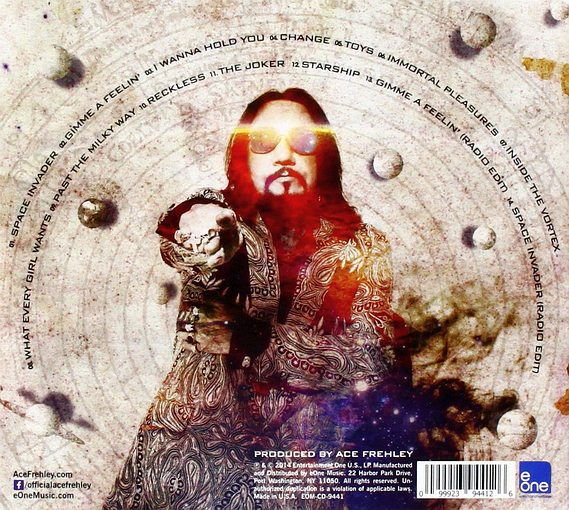 Ace Frehley surprises with “Space Invader”: not only for the very classic songwriting but also for the production / sound, very vintage yet with a 2014 recording technique.
This album sounds, to my ears at least, much more like KISS Klassic than anything on Monster did.

Space Ace has out KISSed KISS. He even got Ken Kelly, the guy who did the album art for Destroyer and Love Gun, to do the cover artwork. This may end up being the best KISS album KISS never recorded… hell, it may end up being the best KISS album since Revenge.
Anyway, forget comparisons to any bands Ace has been associated with in the past – a great record is a great record… and this is a great recording.
With “Space Invader” Ace has outdone himself and proven to the world once again why he has influenced guitar players and that he is still relevant in 2014.
Highly Recommended