YesterRock Records has remastered all the 3 first ’80s albums by German AOR pioneers TOKYO, and their second effort, the awesomely titled “Fasten Seat Belts” is one of their best.
Not only the title is good, the music is even better delivering some true consistent AOR Melodic Rock tunes in the best Euro Eighties fashion.

Fans (like me) of the adorable classic keyboard driven AOR will love “Fasten Seat Belts”. There’s tons of very well produced catchy songs, sometimes treading the Melodic Rock ground with precise guitars and a sonically solid rhythm section.
All are good, being the highlights “Dreamer” and “World of Promises” – seriously I would buy this album just for these two songs alone.

If that’s not enough, we have a newly recorded version of the first single “Keiko” plus other four previously unreleased bonus tracks; “Rainy Days”, “Who Will Stop The Rain”, “Turn Off The Light” and “Mama”.
All are pre-production demos (with very good sound) that were recorded during the late ’80s, and sees the band exploring a more Lite AOR territory. 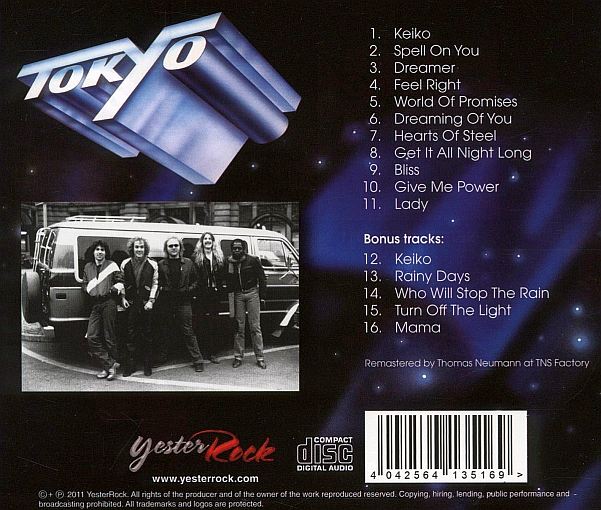 Tokyo certainly appear to experiencing something of a resurgence at the moment and listening to this album it’s easy to see why.
Before the strong heat wave of AOR bands began to sweep the world, this five piece German band commanded by Robby Musenbichler was already swinging with two studio albums in 1982.
These recent reissues have even been enough for AOR Magazine to run a huge feature spread on a band that deserves to be discovered by new generations, and why not, veterans who missed them.
Highly Recommended.