Last December 10th marked the 40th Anniversary of the release date of one of my favorite albums ever: QUEEN‘s “A Day At The Races“. In September, Universal Music Japan Released a very Limited Pressing of the album in a SHM-SACD format (single layer) and a DSD mastering (96kHz/24bit) done by master by Bob Ludwig.
All avialable copies were sold out in a 20 days, turning this superbly sounding version out of print.

The SHM-SACD or Super High Material Super Audio CD, only can be played on a Super Audio CD Player. It’s manufactured in a Single-Layer Stereo SHM-SACD to secure enough reflectance and not to compress DSD file, while the label of the disc is printed with a special green ink called ‘Onsho Shiyou,’ which minimizes diffuse reflection.
Additionally, for this type of releases a carefully selected master audio is used, from existing DSD files to newly converted from analog tapes.

Speaking about “A Day At The Races”, is a little masterpiece.
How did Queen attempt to follow the grandeur, success and expense of A Night at the Opera? The band tried to do it all over again with “A Day At The Races”, a 1976 sequel to its blockbuster from the previous year that continued the album’s complicated studio techniques, stylistic range and bombastic sound.

Not a group to shy away from excess, Queen never thought that you could have too much of a good thing. The British band spent the bulk of five months in 1976 making what would become their fifth record. As they worked on material, the members began to consider the new album a sequel – hence the title (borrowed from the Marx Brothers’ film that followed the comedy team’s A Night at the Opera) and a similarly styled album cover.

Queen’s Opera had been the most expensive album to date, and drummer Roger Taylor said that “A Day At The Races” cost around the same, due to the amount of intricate studio trickery.
Yet, the “sequel” differed when it came to the album’s producer. After four albums, all helmed (at least in part) by Roy Thomas Baker, Races would be Queen’s first self-produced disc.
Without Baker, Queen sought to achieve the same dynamism as their previous release, covering plenty of musical ground between hard rock (“Tie Your Mother Down”), soulful pop with gospel (“Somebody to Love”), dance hall (“Good Old Fashioned Lover Boy”) and wildly shifting studio creations (“The Millionaire Waltz”).

As with Opera, Freddie Mercury and guitarist Brian May handled the bulk of the songwriting, with Taylor and bassist John Deacon contributing a song apiece.
Of course, when recording the tunes, it was all hands on deck, especially with such complicated compositions as “The Millionaire Waltz,” with its many time signatures, stacked vocals and symphonic guitar parts. Penned by Mercury about manager John Reid, the song plows the same ground laid by ‘Bohemian Rhapsody’, although it’s not as widely known as that Queen classic.

“The Millionaire Waltz actually would sum up most of what we were about,” May said in a recent interview. “But it’s something that’s very seldom played, I think it was almost like the successor to ‘Bohemian Rhapsody.’ It’s so incredibly complex that it doesn’t program on radio, I suppose. But, boy, there’s some stuff in there. It’s a favorite of mine – it’s so extreme!”

May would contribute some of Races’ other extreme tracks, at least when it came to heavy music. Kick-off track “Tie Your Mother Down” would quickly become one of Queen’s aggressive concert favorites while “White Man,” inspired by the plight of Native Americans, would thunder and crunch with the best, swaggering hard rock of the era.
The guitarist extraordinaire went a different route with the mild-mannered album-closer “Teo Torriatte (Let Us Cling Together),” written for fans in Japan with some lyrics in Japanese.
Mercury, meanwhile, continued his quest to build mille-feuilles of vocal tracks, creating virtual choirs of his own voice on “You Take My Breath Away” and of his, May’s and Taylor’s vocals on “Somebody to Love.”

Although it was about as complicated a recording as anything Queen had done to that point, “Somebody to Love” had roots in much simpler music: gospel.
Mercury’s love for the song was only matched by the music-buying public’s affection for it. When chosen as the lead single, a month prior to the release of “A Day At The Races”, the track zoomed up the charts, eventually topping out at No. 2 in the U.K. and No. 13 in the U.S. It remains one of the most famous Queen songs. 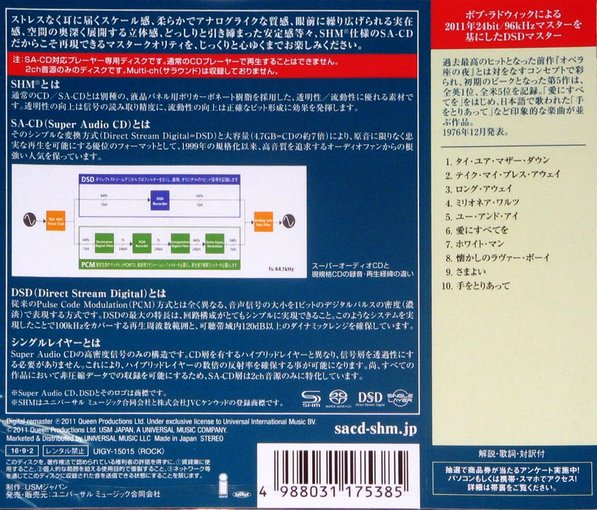 Buoyed by the success of “Somebody To Love,” the record became a sizable hit album when it came out on Dec. 10, 1976 in Britain and Europe, and a week later in the States.
Earning glowing reviews in the music press, topping the charts in the U.K. and instantly going gold (later platinum) in the U.S., the album was perceived as a worthy successor to A Night At The Opera.
A big world tour followed, which also found the band meeting with Groucho Marx and paying tribute to the comedy legend’s impact on their albums (the titles, at least).

This SHM-SACD pressing of “A Day At The Races” sounds amazing. Unfortunately, a Limited Edition exhausted only few weeks after its release.
A Classic