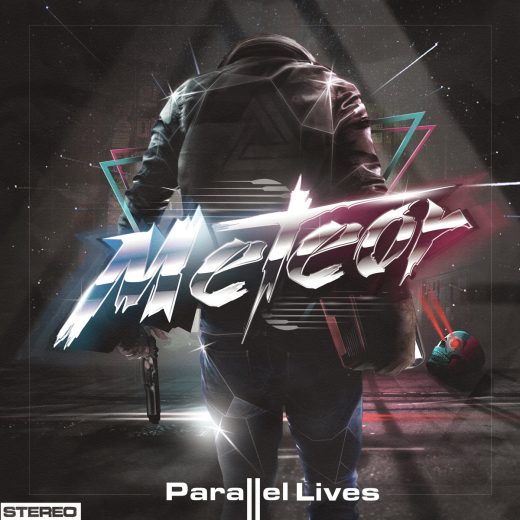 Lets face it; the ‘new’ retro synthwave ’80s movement, like any genre, has a tendency to become repetitive. Many producers get stuck in retro stereotypes to the point of cliche, and tend to repeat the same themes, again and again. In spite of that trend, of course, there is always still innovation.
METEOR‘s “Parallel Lives” is a perfect example of that innovation. While still working within the well-developed framework of modern synthwave, Meteor has managed to create something incredibly new and interesting from the same worn archetypes. From those somewhat familiar tones come a fairly large mix of tonal qualities and subgenres.

Its funny how a few succinct lines of text can change one’s outlook entirely on an album experience and in Meteor’s “Parallel Lives” the preface given literally ties the entire album together.
According to Jorge Reyes, the brain behind Meteor, “This album is a compilation of stories told through songs, each one representing a line, a character with different experiences to others but coexisting in an infinite space, full of human beings with parallel lives.” With these words Meteor gives a wonderfully auspicious premise to the music one’s about to listen to.
The music in “Parallel Lives” is constantly changing and shifting – clashing in a good way.

Meteor launches into the grey concrete night with ‘Escape The Fate’ which really draws broad strokes at illustrating a wider scene before focusing in tightly on the human plight. There’s a chasing panic in the canter of the rhythms.
An element of intrigue runs through the atmosphere and the smoothly swelling synths mask the rush and energy of the totally rockin guitars. The drama ramps up massively towards the end as the protagonist finds some refuge and a calm returns.

The opening tracks instantly bring a depth to the sound and widen out to a massive vista that Meteor then closes in on for tight shots.
I imagine a wide shot of a city at night, with the camera zooming in closer and closer until the individual comes into clear focus and we watch their story unfold before zooming back out again to the wide shot before the next track.

The cool and placid ‘City Lights’ is a gorgeous piece of airy synth wonder that’s as contemplative as it is captivating. Meteor’s use of more traditional 70s prog elements in his guitars and synths lend a rich flavour to the more obviously ’80s elements.
The combination rocks like nobodies business in nearly all the chapters at one stage or another but it is impossible to deny the raucous retro magic that coalesces in the epic ‘Hunter Of Lost Souls’. Using the guitars as the driving force of the track allows the synths to vocalise as delightful accents against the pure bombastic rocktastic riffage.

Another standout track is the very romantic ‘She Has A Gun’. This piece calls to mind the Top Gun romance magnet, Take My Breath Away from Berlin. A singing synth in counterpoint with the bass is really quite fantastic.
Next, ‘Defender’ manages to pay homage to vintage computer games (ChipTune music) while remaining true to synthwave, something not easily done. These genres work well together, a truly interesting fusion – especially when that well-done guitar kick in again to support it.
Finally, you have “White Crows” a truly brassy standout reminiscent of Blade Runner’s soundtrack. This track pits very sad jazzy synth lines against a synth similar to a marimba, filled with beach vibes. An odd mix for sure, but one that is interesting and weirdly satisfying. 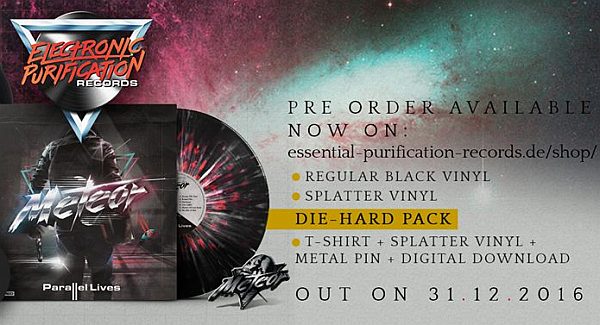 “Parallel Lives” showcases Meteor’s imaginative world in every track on this record and the structure is so strong that it demands to be listened to as one complete experience.
This is pure retro ’80s but much more than just a guy playing with his synthesizers. There’s tons of influences from diverse genres, lots of guitars, pulsating rhythms, melody, etc.
The album has just been released the last New Year’s Eve (December 31) on vinyl LP available on different colors.
Intelligent and elaborated ’80s inspired music – Highly Recommended