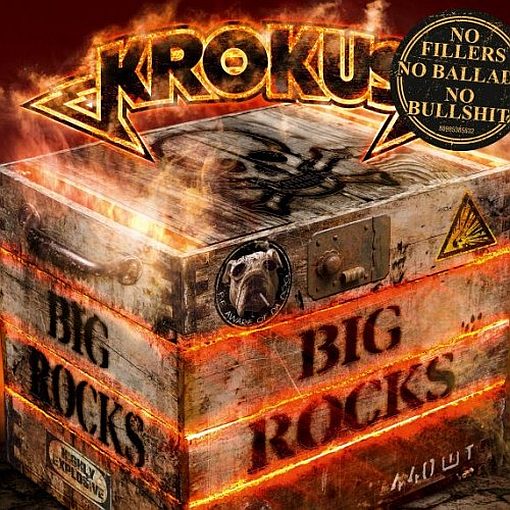 Hard rock & metal legends KROKUS are releasing today their new studio album titled “Big Rocks“, where the Swiss group is paying tribute to bands that influenced them in their origins as a band, going from Led Zeppelin, Queen and The Who, to Neil Young, Bob Dylan, The Rolling Stones and many more.
“Big Rocks” also includes a re-recorded version of Krokus’ hit ‘Backseat Rock N’ Roll’, which together the classic songs chosen, all of them are flawlessly executed / interpreted and spiced up with the typical Krokus edge.

‘It is a homage, a nod to all those artists who paved the way for us, making it possible for us to do what we do,’ says bass player Chris von Rohr.
The idea of such an album was in the heads of the band members since a long time and finally they are executing it.
Von Rohr and his gang put a bunch of iconic classics on this album, each of them a song that’s known all over the world. Tunes like “My Generation”, originally from The Who, and Neil Young’s “Rockin’ in the Free World” are real pearls that were made even shinier by the Swiss quintet.

It’s Marc Storace’s rough way if singing that gives each of the covers a dirty rock ’n’ roll vibe and it’s Von Arb’s, Kohler’s and Meyer’s guitars making classic like “Whole Lotta Love” irresistibly heavy. These three guys push hard and it’s a wall of riffs build by them.
The opening track is an instrumental rendition of the Sabbath classic “N.I.B” where the guitar harmonies in the middle portion sound eargasmic. Up next is Queen’s “Tie Your Mother Down” and Krokus adds a bit of NWOBHM flavour to it and Storace’s vocals do sound a lot like Biff Clyford of Saxon in this one.

There’s also excellent covers of two classics by Neil Young and The Space Davies Group respectively. No rock and roll tribute album can be complete without Led Zeppelin and the eighth song “Whole Lotta Love” takes that into account. Storace almost pulls off a perfect Robert Plant voice in this one and the heavy riffs go along very good with the song.

Up next is a very different sounding “Summertime Blues” cover with a ’80s old school hard rock feel.
Krokus surely knows how to please a classic rock lover and hence did not leave out pulling of a great cover of “Born To Be Wild” in the album, followed by a Dylan and a Stones cover each. The final song is better recorded and mixed version of their own “Backseat Rock N’ Roll” which was released way back in 1980 in ‘Metal Rendez-Vous’ album.

The great thing about “Big Rocks” is that the sound is full-on vintage power hard rock with a touch of blues and without any of the usual studio trickery of today. The band sounds raw and flawless and “Big Rocks” will be a trip down memory lane for lovers of the rock ‘n’ roll classics.
“Big Rocks” is one of the best cover albums I have heard for many years. Krokus interpreting these classics became an entertaining experience that you shouldn’t miss. These guys just did this longplayer due to passion for rock and no other reason. Thumbs up for this vitalization of rock history.
Highly Recommended