On June 27, 1989, an album bearing the head-scratching title “Gretchen Goes To Nebraska” was quietly unveiled by the Houston power trio sporting the nearly as cryptic name of King’s X. Then people heard the music.
To say King’s X had conjured a sound as inventive, original, and downright alien as has ever emerged during the glam / hair metal era might sound like some serious, almost irresponsible hyperbole — if not for the fact that no one else has crafted anything remotely like it — except for self-professed imitators.

And that sound (already teased on their 1988 debut album Out of the Silent Planet) felt somewhat like a tear in classic rock’s space-time continuum, boasting what one might describe as a blend of Rush’s heavy progressive rock, classic natural melodic instincts, and heavenly vocal harmonies.
Yet even this was just the tip of the musical iceberg, which the album set about introducing via the ringing, psychedelic sitars, stately march, and awe-inspiring solemnity of opening number ‘Out of the Silent Planet’ (held over from that first album).
Then came its hard-driving follow-up first single ‘Over My Head,’ which miraculously brought hard rock into a sanctified gospel congregation behind Ty Tabor’s multi-faceted guitar work and Doug Pinnick’s astoundingly soulful shouts.

“Gretchen Goes To Nebraska” may be challenging like Silent Planet was, but King’s X try to make it easy for you to climb aboard the train.
The light melodic picking in ‘Summerland’ sound enticing so just come on in. Pinnick’s soulful wailing brings the clouds but Ty’s harmonies blow ’em back away. ‘Summerland’ is a rock triumph, possessing drama with melody and integrity in a flawless mix.
On ‘Everybody Knows a Little Bit of Something’ we are now on funky ground. Accelerated for action, this track is a pulse-pounder not to be missed. King’s X can do no wrong, especially when combining disparate elements in new ways. 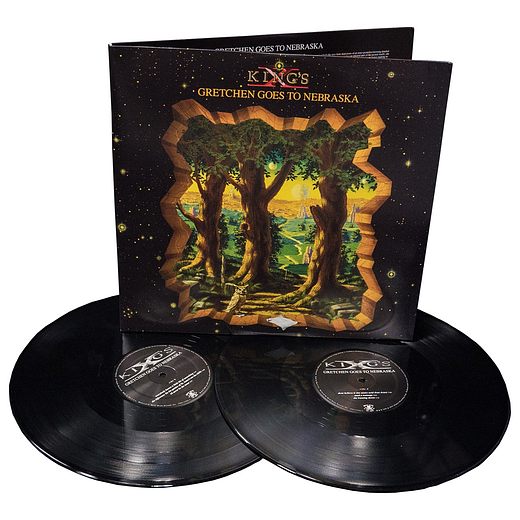 Another side of King’s X is the acoustic one often visited by Ty Tabor, and that’s ‘The Difference (In the Garden of St. Anne’s on the Hill)’. The setting feels like a chilly fall day but King’s X paint pictures that allow you to see your own images. That’s the beauty of the music.
‘I’ll Never be the Same’ is more familiar King’s X territory. Never keeping it simple, never making it inaccessible must have been the motto. Their pool of influences seems to come out slightly different each time.

The Church-like organ by Sam Taylor makes its debut on ‘Mission’, an appropriate place for it, but that’s a bluff. ‘Mission’ is actually a metallic assault on televangelists. “What is the mission of the preacher man?” asks Doug in an impassioned wail. “Some are true, Some do lie,” he warns.

‘Fall on Me’ will then take your head off with some of the rockingest King’s X on the album. If a record label was looking for an accessible single, here it is. I guess this band really was just too smart for radio, like with the cosmic ‘Pleiades’. On this song imagine the love child of Ritchie Blackmore and Jimmy Page: they had a baby and named it ‘Pleiades’.

Furthermore, infectious rockers like ‘Fall on Me’ (with its ultra-tight vocal harmonies), ’Don’t Believe It – It’s Easier Said than Done’ (showcasing Jerry Gaskill’s intricate percussion), and the galloping ‘Send a Message’ gave further evidence of King’s X’s innate melodic gifts and all-purpose songwriting prowess — all the way through to the LP closer, ‘The Burning Down,’ which returned listeners to the mystical, otherworldly atmospherics that had begun their sonic odyssey, nearly one hour prior.

Despite widespread critical acclaim, “Gretchen Goes To Nebraska” only managed to get as high as No. 123 on the Billboard 200. Still, those gravitated towards their sound saw the light to entirely new possibilities within the framework of rock and roll.
Possibilities that King’s X continue to explore unto the present day, leaving fans and peers alike flabbergasted with admiration for one of rock’s most distinctive outfits ever. 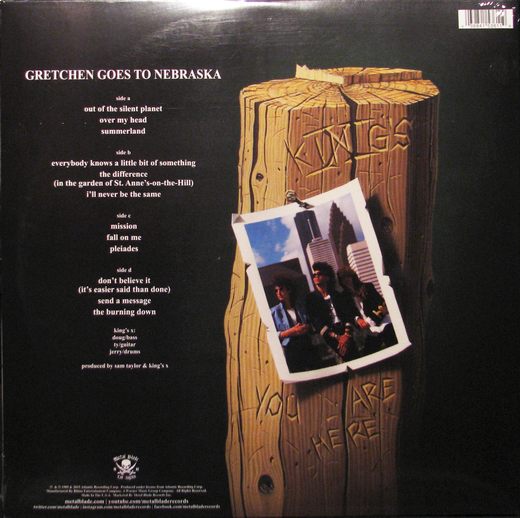 The sound of this “Gretchen Goes To Nebraska” 2-LP reissue is terrific. Thanks of being separated into two vinyls, there’s more room for the harmonics to come out. You know, on vinyl LP, more space (less tracks on each side), the better.
The first two King’s X albums boasted rich and impressive album art. Gretchen is the best of the pair.
Now that’s an album cover… and on a 12” LP you can see it greatly. On CD it’s much harder to appreciate. Anyway, no matter since it’s the music that counts.
It’s rare for a band to grow from an incredible album like Silent Planet to something even bigger like Gretchen. That’s exactly what King’s X did, even though they did it in obscurity.
HIGHLY Recommended

SIDE B
04. Everybody Knows a Little Bit of Something
05. The Difference (In the Garden of…)
06. I’ll Never Be the Same