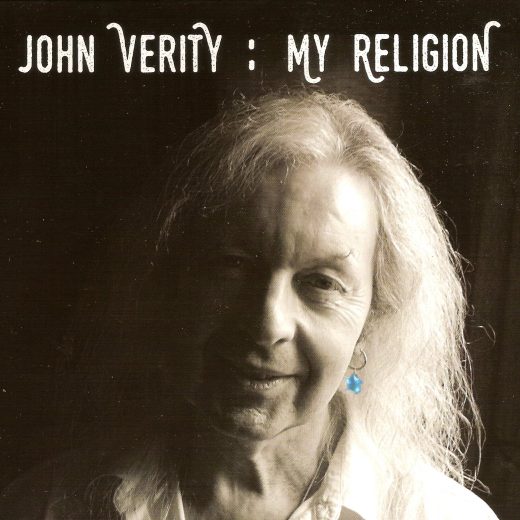 The aptly titled “My Religion” is the new album from legendary guitarist JOHN VERITY where, in fact, delivers all the musical paths which have been his entire life ‘religion’.
Known for being part (and the driving force) of the as well legendary acts Argent and Phoenix and having released a string of stupendous solo albums during the ’80s, Verity has learned his chops on the road, in the studio, on a high profile stage with some arena tight-trousered big-haired rock and also in the pubs and clubs of the UK and around the world.
And in 2017 is still standing alone up-front impressively casting a spell for a big and adoring audience.

His new album “My Religion” is a great cocktail of his musical history with tracks from bluesy hard rock to slow sweet and very moving modern blues.
Six of the tracks are self-penned and the remaining four come, from amongst others, Willie Dixon and JJ Cale, and this alone will give you a clue to his musical versatility.

The opening title track is a straight forward piece of foot-tapping heavy blues rock where he sets out his ‘religion’, and he raises his guitar to his dreams.
Then comes a terrific self-penned lyrical and uncluttered blues piece ‘Hope for the Best’ where the blues sustain is given a run-out to complement some wry words about the life of a bluesman… he’s still ‘paying his dues and playing the blues’, he just can’t help it.
Gary Moore would have been delighted to have penned and played this.

The next three tracks give you a strong sense of how mighty Verity’s performances would have been in his more hard rockin’ days.
Opening with some classic power chords, ‘The Devil’s Music’ gets the full multi-voice treatment and refrain with a true hard rock spirit.
It sounds just like the kind of tune by his fellow Argent alumnus Russ Ballard that Rainbow might have snapped up for a radio-friendly version back in the ’80s. One of my favorites on the album.

Then his cover of Don Nix’s ‘Going Down’ has Verity opening up with his stadium voice and socking it to the stalls with some major rock guitar breaks. Forget waving your iPhone, go find your old cigarette lighter and shout out the refrain – this is pure classic rock done to perfection.
The cover of ‘Chain Of Fools’ has a really mellow vocalist Bianca Kinane taking centre stage against John’s driving guitar backdrop to deliver an accomplished version of this familiar number, and in JJ Cale’s ‘Cocaine’ (made famous by Eric Clapton), his distinctive voice is perfectly matched by his subtle guitar work for this moody old favorite song.

The remaining tracks shows Verity’s classic blues formation and influences.
‘Prove Your Love’ is a self-penned comment on a relationship – ‘too many questions, too many lies’ and it gives him an opportunity to drop in some perfectly constructed guitar breaks which are best defined by their elegant simplicity.
Willie Dixon’s ‘Spoonful’ is an old friend greeted by John in style and given an edge by some smart help from Lee Vernon on harp.

‘Farkhunda’ is quite beautiful. It was written by John to remember the woman who was lynched by a male mob in Kabul for something she didn’t do. It is a most powerful lyric, both majestic in its sentiment and moving in its delivery. This could and probably should, stop you in your tracks. Nicely arranged with a totally appropriate female chorus backing.

And for the end, we have another pearl and highlight. Called ‘Oh Why?’ this is a broad sweeping piece where Verity pick up the acoustic guitar.
It’s a slow composition plenty of atmospheres, but not a ballad, some kind of Gary Moore’s touching kind of song mixed with, and call me nuts, a vocal performance reminiscent of some of the great moments of the Alan Parsons Project. The beautiful vocal lines are wrapped with a multi-voice backdrop and an almost orchestral arrangement.
It could have been designed to make sure that you know that you are listening to not just an accomplished bluesman / rocker but also a major versatile talent. 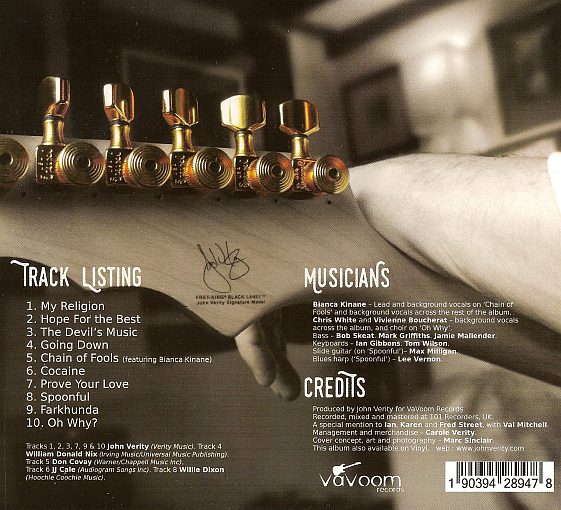 My Religion” showcases the immense talent of a veteran musician called John Verity.
It tells you all about the range of the artist. It has some terrific rocking moments, it has some great lyrics, it delivers both traditional and modern blues with some subtlety and you are left under no allusion that you are in the hands of a proper musician and vocalist who would have no problem filling a stadium, packing out any club and bringing a festival audience to their feet.
And of course, it seems that is exactly what he is still doing.
Go buy. Highly Recommended