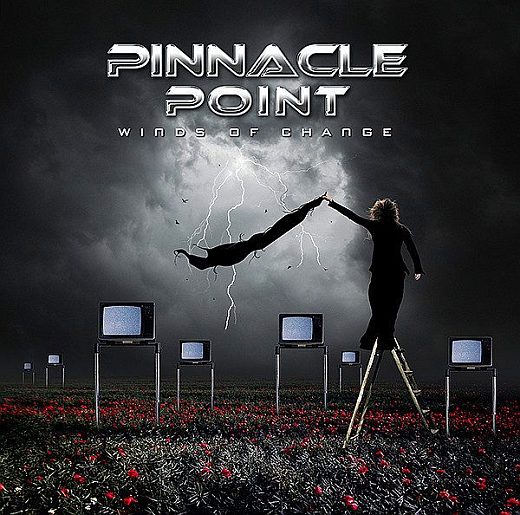 End of the year / beginning of 2018, it’s time to recap about the best 2017 releases, by category.
There has been many good AOR / Melodic Hard Rock debut albums this year, but coming out of nowhere, PINNACLE POINT delivered a truly awesome first CD with something for everyone.

PINNACLE POINT is the new band of Danish Torben Enevoldsen (Fate, Acacia Avenue, Section A) being “Winds Of Change” its debut CD released via Perris Records. The project took shape around Christmas time of 2015 when Enevoldsen met vocalist Jerome Mazza (Ex- Angelica) via Facebook – a true sign of the times – and soon after decided to write some songs together.

The songs turned out extremely well and the idea of doing a full album together quickly emerged. During the spring and summer of 2016, Torben and Jerome wrote songs individually, as well as swapping ideas back and forth.
The recordings were done simultaneously and by the end of the year, Jerome Mazza did all of the vocals but also played keyboards on a few songs. Torben played guitar, bass and keyboards, but to make the music truly come to life the duo asked some of their friends to help out with the recordings.
Torben called hid good buddy Dennis Hansen (Acacia Avenue, Section A) to the handle drums and provide the steady groove the songs needed, plus guest performances by Howard Helm on keyboards, Cara C on violin and Dan Orlando on piano.

Pinnacle Point’s is a blend of melodic hard / hard rock, but spiced with a healthy dose of progressive rock and AOR.
Think a mix of the classic years from Journey and Styx, a more modern AOR touch ala The Storm and a dash of the more commercial side from Kansas and you get a picture of “Winds Of Change” sound.

In fact, another band that springs to mind while listening to Pinnacle Point is Mike Slammer’s Seventh Key recent work; punchy, bright melodic hard with a little progressive background.
Jerome’s strong and impressive voice delivers some memorable harmony hooks and an adept flow, able to go from soft to hard, and from soulful to edgy to sincere.
Torben’s musicianship has been already demonstrated in all the bands he has been involved, which dexterity allows him to fluidly shift between his honed technique and improvised, infectious riffs and brilliant melodies.

After the short but excellent ‘Prelude’ which is much more than just an ‘intro’ via its solid mix of keys / guitars and featuring a great violin part resembling Kansas,
‘Homeward Bound’ is sure to be one of the best melodic hard rock songs of the year, some kind of Journey ’83 meets The Storm. Mazza sounds like a young Kevin Chalfant (The Storm, 707, Two Fires) and Torben delivers a scorching solo. Awesome track.

‘Damage Is Done’ is harder and similarly killer with a superb main melody and a fantastic Steve Perry-like chorus. Midtempo ‘All We Need to Know’ add pianos and acoustics for a more sweet melody akin Styx. Love it.
‘Changes’ provides variation for an elaborated melodic rocker with Journey-isms all over it, title track ‘Winds of Change’ has an epic punch that reminds me an Asia song, while ‘Never Let Go’ returns to an uptempo pace with a modern progressive feel but catchy and melodious.

‘What Will It Take’ is the ballad where Mazza’s vocals shine, there’s exquisite guitar work and an atmosphere similar to Journey’s Trial By Fire.
‘Sail Away’ embodies an AOR feeling (love the verses phrasing), then ‘With You’ wraps this excellent record with a midtempo metric embellished by acoustic guitars and a dreamy vocal arrangement, again recalling The Storm.

Pinnacle Point’s “Winds Of Change” is one of the surprises of the year folks. A superbly composed and arranged album with exquisite songs and wonderful melodies.
Torben Enevoldsen is an underrated little genius having already created some terrific music in the past, but I think Pinnacle Point is one of his finest moments.
If you love Journey, The Storm, Styx and Kansas’ more accessible side, do yourself a favor and listen to “Winds Of Change” as soon as possible.
One of the best debuts of the year without a doubt.
AWESOME