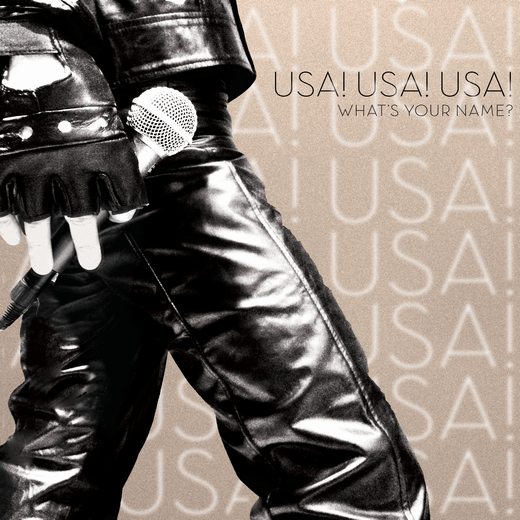 This blog’s favorites Waltham have their new album two-years delayed now, but meanwhile vocalist / songwriter Frank Pino Jr. keeps himself busy fronting USA! USA! USA! and touring all over the US East coast. The band’s self-released album “What’s Your Name?” has been sent to us as promotion for the next string of shows, and Wow, they sound awesome.

USA! USA! USA! was founded by guitarist Ken Susi (from Boston metallers Unearth) when he started thinking about what got him into music in the first place, and it all came back to him in a rush of memories: girls.
Ken wrote his first song at 12 for a girl in his class. He recalled her happiness at hearing a simple song written specifically for her, and after years of writing and playing intense metal, Ken wanted to get that feeling back.
He had a vision of the perfect American melodic rock band: clean vocals, catchy hooks and riffs, big guitars. And all the songs would be for and about girls the band knew.

Ken reached out to the best players he’d met on the road, recruiting bassist Ben Alexis of Canada metal act Arise And Ruin and second guitarist Dave Stauble from Since The Food. Then he found drummer Pat doing session work.
They all fit the bill in terms of style & sound, but the frontman had to be the quintessential rock and roll crooner with style and flash that would make the boys want to listen to him and the girls fall in love with him.

Ken found the answer to his prayers in Frank Pino Jr, best known as the frontman of Waltham, Boston favorites who swept many a Boston Music Awards, released three albums, toured Europe, etc.
Frank’s classic rock ‘n roll training, stage presence, and work ethic made him a perfect foil to Ken, and when they sang together their clear vocal styles meshed perfectly.

Music-wise, USA! USA! USA! is inspired by classic ’80s US radio-friendly melodic rock with a modern sound very much in the Waltham fashion yet with more ‘punch’.
You can hear some of the more modern side of Harem Scarem, but also catchy melodies from Cheap Trick, Van Halen and why not, Rick Springfield.
Take a listen / watch to the video below: it’s a bit silly conceptually but wait until the chorus explode… wow, this is darn catchy.

As said, all titles on “What’s Your Name?” is a girl’s name (something very common on most ’80s albums) while the band also does a rocking version of ‘Girls Just Wanna Have Fun’ (made famous by Cyndi Lauper).
As you see, it’s all about girls… hook-laden, feel-good songs with lots of melodies. USA! USA! USA! deliver as well an acoustic version of ‘Karina’, one of the strongest tracks on the album, showcasing their are a really good band beyond the infectious electric guitar riffs.
Highly Recommended