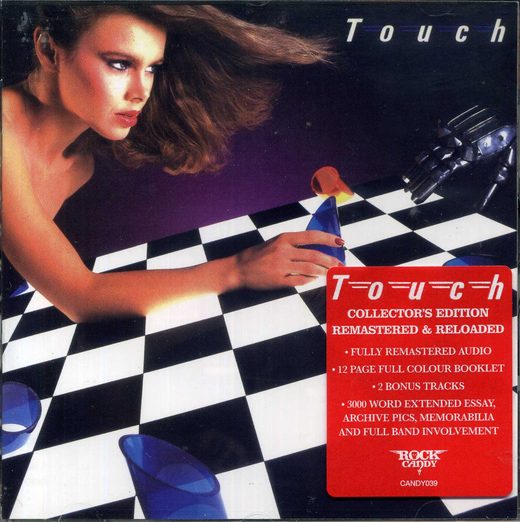 Rightfully considered one the pompy AOR / Melodic Rock genre’s pillars, the first, self-titled album from TOUCH has been remastered by Rock Candy specialists resulting into a superbly sounding CD including 2 rare cuts as bonus tracks.

During the late Seventies and early Eighties the American rock scene was bursting with deliciously ambitious talent, none more so than New York based quintet Touch.
Led by a veteran of the scene Mark Mangold (ex- American Tears and later in Drive She Said), the band locked into a style of Melodic (hard) Rock / AOR music that would eventually father multi-platinum artists such as Survivor, Journey and Foreigner in years to come.

Focusing on supremely crafted songs with huge hooks, luscious vocals, stabbing keyboards, razor sharp guitars and impressive arrangements, their debut self-titled album immediately struck a chord with fans and critics alike.
With such rich talent on display it was hardly surprising to find that the band were courted by some of the biggest power brokers in the industry including Deep Purple manager Bruce Payne, and Atlantic Records sister label Atco, with whom the band eventually signed in 1980.

Produced by renowned English producer Tim Friese Greene, the ‘Touch’ album caused a sensation amongst fans of the genre being hailed as instant classic and a record that would go on to become a master class in AOR technology.

The album shoot Touch to secure a slot at the inaugural UK Mosters Of Rock Festival held at Donington Park, going down in history as the first ever band to perform at this legendary event. One of the bonus tracks was recorded there precisely.
Sadly, unlike many contemporaries, Touch never received the commercial acclaim that their music undoubtedly deserved. Despite this, however, the Touch legacy continues to endure and impress with each passing day as one of the seminal rockin’ AOR bands of the genre, and now this album owns a cult classic status. 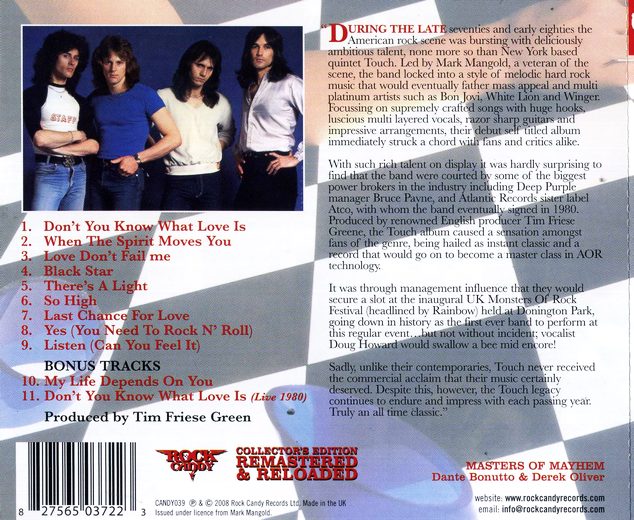 With an excellent remastering job (truly brilliant) by Rock Candy and two bonus tracks, “Touch” is a must have for any AOR / Melodic Rock fan, never sounding outdated, on the contrary, all this material still stands vital and fresh.
This is where all started for the genre…
ESSENTIAL