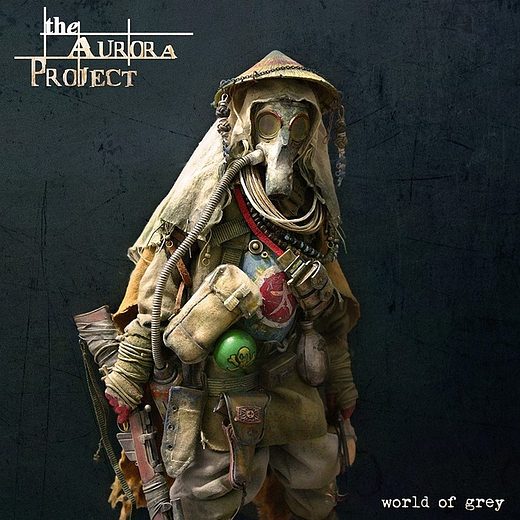 Hailing from the Netherlands THE AURORA PROJECT ave been making music for about 15 years, but the just released “World Of Grey” is only their 4th album. They are new to me, and must admit I was really surprised to see them listed under the Prog-Metal banner because to my ears the band is clearly melodic prog or a heavier version of Neo-prog, where Arena, Rush and even Marillion and Dream Theater come to mind quite often.
Maybe it’s the album cover – which perfectly reflects the lyrical concept – but musically we are talking about very melodic material.

While The Aurora Project music is at places busy and quite heavy, there’s continual contrasts to lighter, highly melodic passages around a concept set about the tension between an establishment order and the people, of which the latter will lose out.
Through increasing bugging and restrictions on media and Internet, the mouth the people are surreptitiously gagged and freedom curtailed. Democracy is no more and a gray blanket of control and repression descends over the world.
Well, it’s a pretty realistic concept, and fits perfectly with the music.

The overall sound The Aurora Project is full, rich, benefited by a clean production. All with most all Dutch Prog bands, the musicianship is precise, clear, with a complete guitar work by guitarist Remco van den Berg and some remarkable vocals by Dennis Binnekade. We have interesting keyboard arrangements and an inventive rhythm section.
But above all, the star here are the impressive compositions. The songs have a clear head and tail and all are spiced with strong choruses that invite to sing along loudly.

The influence of keyboardist Marcel Guyt is truly important to The Aurora Project sound. At places he pulls a grand wall of keys complete with Mellotron samples, then there’s times when keys are called to a cinematic game where he makes the biggest impression. For example, just listen to the last part of ‘Expect Us’.
Additionally, there’s also stunning orchestrations by Siddhartha Barnhoorn (film soundtrack composer) which create great impact.

Remco van den Berg is not limited to melodious solos. His guitar riffs provide the sustain for the songs and he does it with gusto; heavy on the rocking passages, sharp and rhythmic when needed. His solos on ‘Deadly Embrace’ are very good.
And then there’s singer Dennis Binnekade with his strong leads, at times quite epic as on the groovy ‘Stone Eagle’, a great showcase for his abilities

“World Of Grey” is a very strong and intense album in all respects. Not only the music demands all your attention, so do the lyrics too. However, I found myself listening to the album in the background not paying attention to lyrics and flows greatly.
The Aurora Project is a pretty unknown act outside the prog circles, and I hope this album expose them to a wider audience. It has the potential; it’s melodic, dynamic and almost catchy at places.
Strongly Recommended.