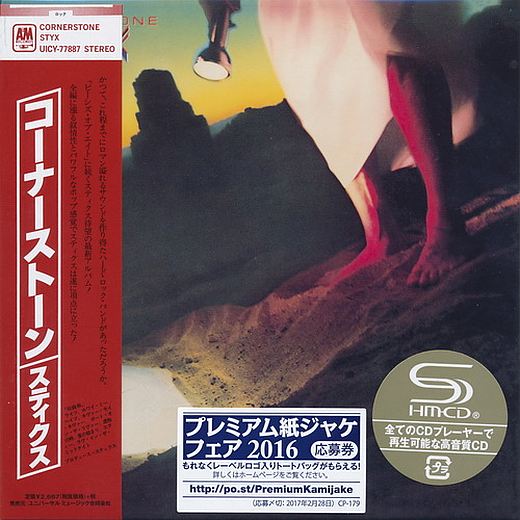 After so many years it finally happened… someone did a proper remaster of STYX‘s “Cornerstone“. Some time ago appeared a great nine-album cardboard sleeve (mini LP) reissue series of Styx on high quality SHM-CD, all featured here on the blog.
It was a Limited Edition which went out of print, so now Universal Japan decided a new edition, this time with a fresh 2016 remaster of all albums, and specially welcomed is the one on “Cornerstone” benefited by a natural EQ and excellent harmonics.

“Cornerstone” was Styx’s follow-up to their second consecutive Top 10 selling Triple Platinum album in a row, 1978’s Pieces of Eight. Like on the four previous Styx studio recordings, the band produced the album themselves once again.
However, they started using a new recording studio Pumpkin Studios in Oak Lawn, Illinois. Plus, the album was the first where the band shied away from the art-rock/prog-rock influences that dominated their first eight studio albums and was the band’s first move towards a more mainstream melodic rock direction.

Dennis DeYoung had two ballads on the album. The first was the album’s first single and Styx’s only US #1 single “Babe” which Dennis wrote for his wife Suzanne. The track was performed and recorded as a demo with just him and the Panozzo brothers but then James Young and Tommy Shaw heard the track and decided to put it on “Cornerstone” with Shaw overdubbing a guitar solo in the song’s middle section.
A monster, timeless classic. 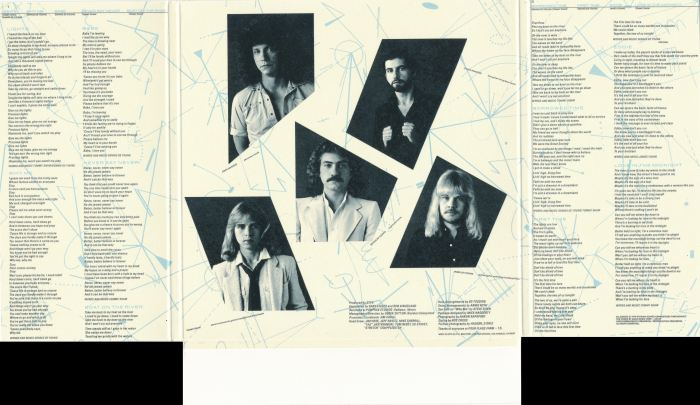 The other was the power ballad “First Time” which was intended to be Cornerstone’s second single (radio stations were playing it and got such a response that A&M wanted it out) until Shaw complained and threatened to leave the band as he wanted a rocking cut. “Borrowed Time” was released instead.
DeYoung also wrote the Top 30 hit, the poppish “Why Me”, which was the third single.
The criticism to this album is well documented: too many DeYoung ballads, not enough guitar-driven rockers.

But Cornerstone stands right up there as a rock&pop / melodic rock little masterpiece, not just a ballad-esque record as many criticize.
The excellent “Boat On The River” is melodic but a uniquely enjoyable Tommy Shaw tune, and Not a ballad. “Lights”, “Why Me” and “Never Say Never” are great mid-tempo melodic rockers, while “Eddie” flat out rocks, as does “Borrowed Time”.
The chorus of “Love In The Midnight” is an example of the best of Tommy and Dennis when they collaborate together: awesome harmony vocals. 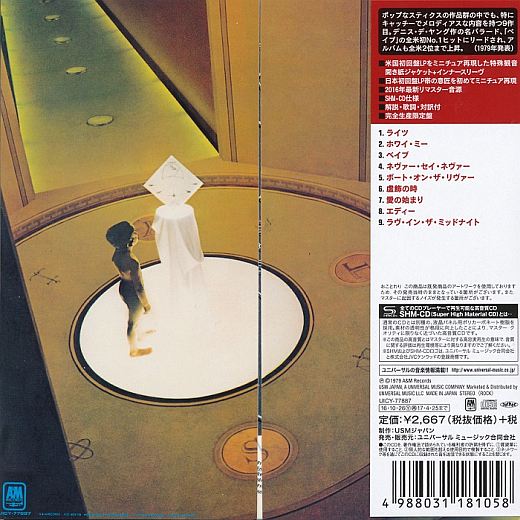 So, “Cornerstone” is criticized by many as Styx selling their souls. Wrong. This is one of the first mainstream Melodic Rock / AOR albums ever, and it’s greatly done. When released, specialized trend enterprise Gallup did a poll: Styx was named America’s most popular Rock band.

This much needed Cornerstone’s 2016 remastering feels great to my ears, and as usual the Japanese mini-LP reproduction of the album artwork and sleeves is top notch.
I love the attention to detail, exactly as the original LP featuring the split in the middle of the back of the album, kinda an open book.
A Must Have