Three years ago, and highly deservedly, the best ’80s SAMMY HAGAR albums finally received a SHM-CD release in Japan all in the excellent cardboard sleeve Mini LP format, remastered and with the usual, complete original artwork reproduction. We featured here one of them, but now it’s time for “I Never Said Goodbye“, one of Sammy Hagar’s most overlooked albums.

Published in 1987, “I Never Said Goodbye” is Sammy Hagar’s only solo album while he was the lead vocalist in Van Halen. The album was done as a contractual obligation to Geffen Records as a condition of his leaving the label to join Van Halen and their record label, Warner Bros. Records (Geffen’s distributor at the time).
The album was originally simply titled ‘Sammy Hagar’, and included an untitled cover. Later was renamed “I Never Said Goodbye”, the name being chosen as part of an MTV promotional contest. Some very early pressings retain the title ‘Sammy Hagar’, now a collector’s item.

The recording features Eddie Van Halen on bass and co-producing, but years later it was revealed he also played guitar on ‘Eagles Fly’ middle instrumental section. ‘Eagles Fly’ and ‘Give to Live’ were also performed live by Van Halen together with Hagar, with the former recorded and included on the VH album Live: Right Here, Right Now.
The excellent ‘Give to Live’ also topped the Mainstream Rock Tracks chart in 1987, a first for Hagar as a solo artist.

But apart from these ballads, we find very strong rockers in ‘Back Into You’, ‘When The Hammer Falls Down’, ‘Privacy’, etc. showcasing how skilled Hagar always was writing catchy tunes mixed with an occasional song with thoughtful and somewhat deep lyrics.
Hagar is an outstanding songwriter, which is evident in this recording despite of being a ‘contractual’ album. 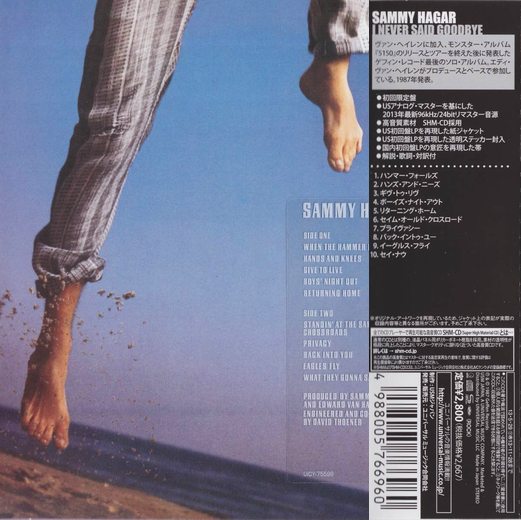 Not so long ago Hagar himself said that “I Never Said Goodbye” is one of his favorite solo albums, which includes some of his most ‘personal’ songs.
It’s a very ’80s sounding record where this really fine remastering job unearths lost bass harmonics and provide an overall punchier sonic output. This SHM-CD sounds great indeed, unfortunately now out of print.
Highly Recommended