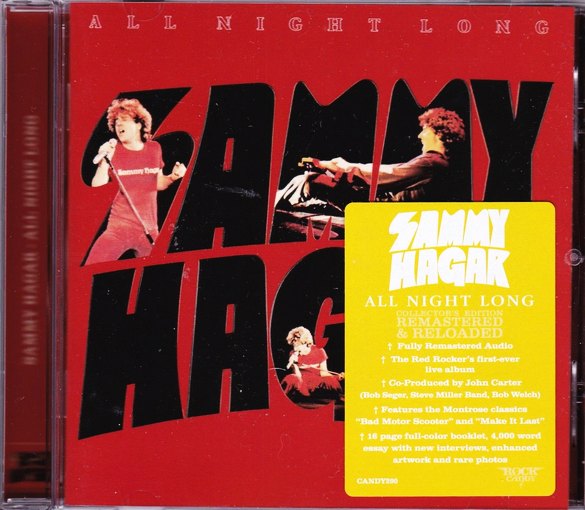 One of the great things for rock bands during the Seventies was that they had plenty of opportunity to play live, to hugely appreciative audiences.
But not only did their studio recordings have to be great they also had to deliver live in concert, and this was an area that really separated the wheat from the chaff. If you were known as a great live act then your success was almost guaranteed.
With this in mind, it’s no surprise that Sammy Hagar’s live performances had almost become legendary.

After three studio albums he had carved out a rock solid audience eager to lap up his no nonsense live performances, and “All Night Long” is a fine testament to that fact.
Surrounded by members of what was, in effect, the same band that Sammy had commenced his career with Montrose (including future Night Ranger keyboardist Alan Fitzgerald) and the addition of super guitarist Gary Pihl, the album cemented his ability in stone.

Originally released in 1978, and taped at headlining shows in California whilst he was promoting his 3rd solo album, “All Night Long” captures Sammy in full flight.
Remarkably, there are none of the usual overdubs or ‘studio fixes’ on this record whatsoever, just the band and a mobile studio capturing a moment in time that still sounds incredibly fresh to this very day.

You have rollicking version of ‘Red’, ‘Rock ‘n’ Roll Weekend’ and the excellent ‘I’ve Done Everything for You’, a Hagar original which went on to be a hit single for Rick Springfield in years to come.
Of course, the ghost of Sammy’s past legendary band Montrose is never that far away with electrifying renditions of ‘Make It Last’ and ‘Bad Motor Scooter’ underscoring a link that will always be present.
Terrific remaster by Rock Candy Records.
Highly Recommended