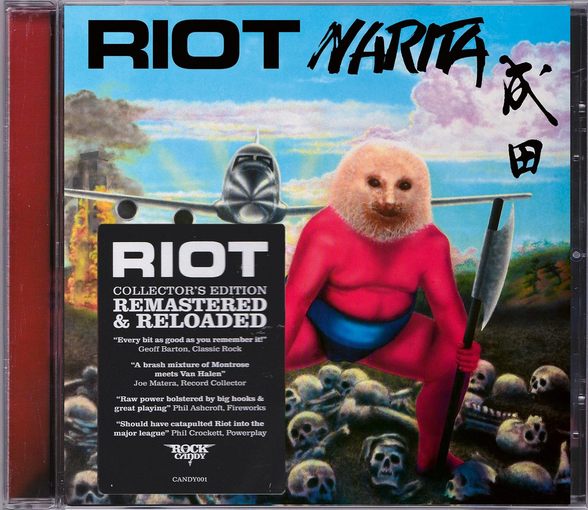 This one was requested by one of you and is a real pleasure to me to be featured here; “Narita“, the second album by Americans RIOT, in its ‘Remastered & Reloaded‘ Rock Candy Records version.

“Narita” is a very special album to me, I grow up listening to this killer / no filler rockin’ LP.
Musically, Riot has always been ahead of their time, being in this earlier incarnation pioneers in many ways.
Although their debut ‘Rock City’ contained the first examples of a proto speed metal approach to the ever expanding spectrum of harder edged styles, “Narita” shines a bit more in the overall musical department, offering up a good mix of classic hard rock and early, traditional metal that hasn’t lost any of its punch with the passage of time.

All songs are pure hard rockin’ gems, blues based but highly melodic at the same time.
Driven by the stupendous guitar playing of talented Mark Reale and the ‘magic’ vocals of Guy Speranza – a unique singer and one of the best ‘classic hard rock’ singers ever – Riot’s musicianship is outstanding.
Among my favorites (I love them all) tracks there’s ‘Road Racin’ (an absolute barnstormer), ‘Waiting for the Taking’ (killerrr), the punchy “Kick Down the Wall”, the primitive hair metal feel of “Hot for Love”, the anthemic “Here We Come Again” or the hard rock perfection of “White Rock”. 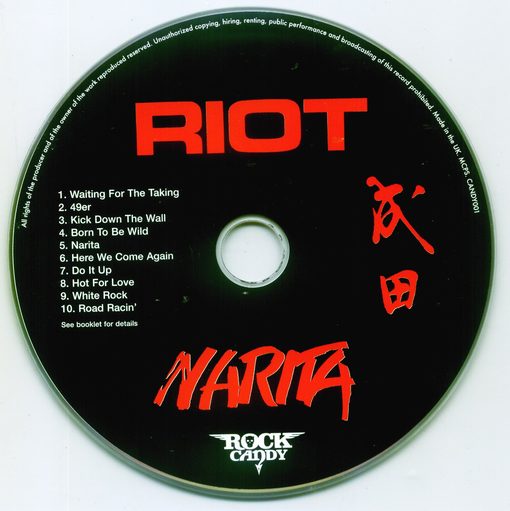 The cover version of the Steppenwolf’s classic ‘Born To Be Wild’ is the best ever done.
The tempo has been ratcheted up quite a bit (to the point of classic metal), the dual guitar attack gives the song a more punch oriented sound rather than the thin high end dominated atmosphere of the original, and the guitar soloing is miles above it in the technical department.

Yeah, “Narita” sports one of the ugliest album covers in history, but the ominous creature apparently had a strange fascination for me. It took some time before I realized the meaning of “Narita” and the imaginary surrounding the picture. It was an homage to Japan where Riot were stars, named after their controversially placed airport.
Anyway, if you do not like the cover, the music packed inside is terrific, timeless classic hard rock.

“Narita” was really hard to find for many years. The album was actually only published in Japan and available as import worldwide until it was finally released in the US about 5 months later. It only appeared on CD in Japan years after, but became out of print in the late ’80s.
Until Rock Candy Records came to the rescue and reissued “Narita” for the first time of CD outside Japan and for the first time remastered.
And yes, Riot’s “Narita” is the first Rock Candy release ever, the 001 album in their catalogue. 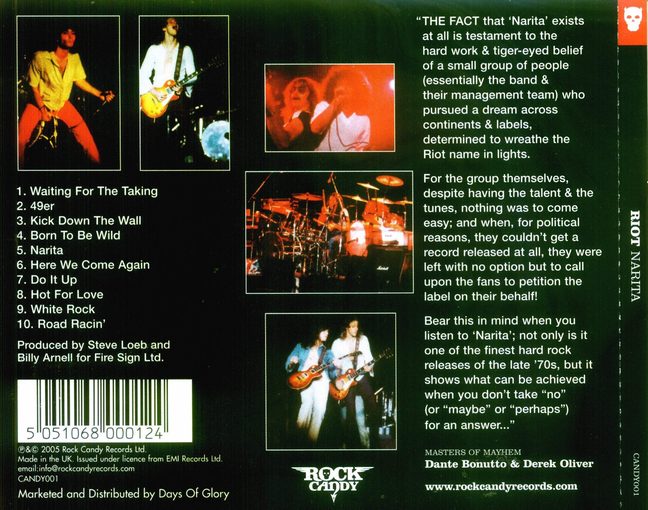 All 3-first Riot albums are considered ahead of its time in terms of style, production and sound, much defining the hard rock evolution in years to come. Tesla, Y&T and many other bands / musicians once cited Riot as influence and I can see / hear why.
Do not be fooled by fake ‘remasters or reissues’ floating the web (all poor transfers), this Rock Candy version is the real deal.
To me, a MUST HAVE into any classic hard rock collection.