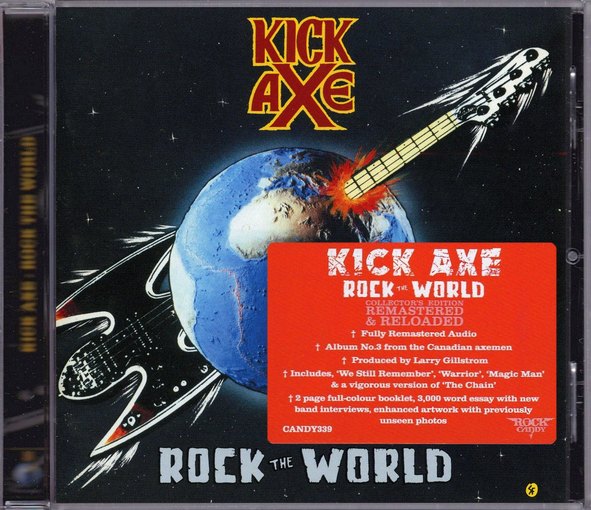 “Rock The World” is KICK AXE‘s third album, the last of the batch remastered by Rock Candy Records. “Rock The World” mix the heaviness from the band’s first record and the melody from the second, resulting in a unique sound like nobody else around those years.

It’s often the case with artists that they produce their best work when they are most under the most pressure. For Kick Axe this theory proved to be true when they unexpectedly found themselves cast adrift from their American label Pasha Records.
It was a tough pill to swallow at first, but with the support of Canadian CBS the band lived on to not only fight another day but also to deliver their most accomplished record.

The Vancouver based quintet had made strong inroads into the world of hard rock and metal over the previous years, but had failed to connect on a commercial level. Their brand of tough muscular hard rock secured them a firm and committed following but various factors had prevented them from developing their unique abilities.
The recording of “Rock The World” showed that they could not only write great material but also refine their style of grandiose hard rock to reach its full potential.

Appeared in 1986, the record featured ten superlative tracks; from short sharp red hot rock to captivating widescreen epics such as ‘We Still Remember’, ‘Magic Man’ and ‘Warrior’, all emblazoned with grandiose arrangements yet offering a firm metal foundation. 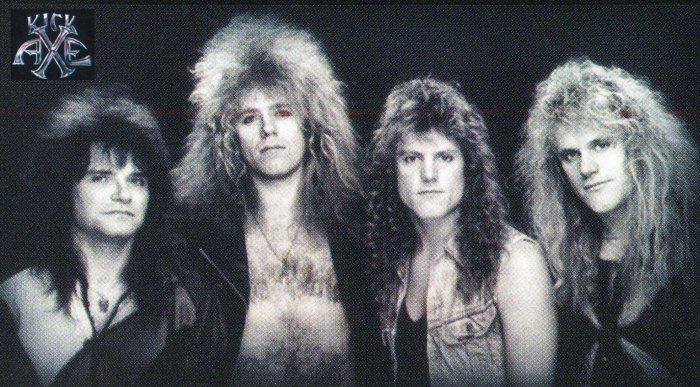 ‘Red Line’ always has been a personal favorite, the title track rocks as well and there’s epicness on ‘Piece of the Rock’, originally written by Kick Axe for Tony Iommi but eventually given to King Kobra for their Ready To Strike album one year before.
The production, handled by the band, is crisp and tight, giving no indication that they were forced to record the album on a shoestring budget.

“Rock The World” was released on Epic Records through CBS in the band’s native Canada, and the smaller label Mercenary issued it on LP / Cassette / CD in the USA. That original CD was a much sought-after collectible, going for as much as over $150 on eBay.
Although Kick Axe reissued the album (with different cover artwork) in 2004, this Rock Candy remastered fresh release is the one to get revealing new layers of sound.
Strongly Recommended