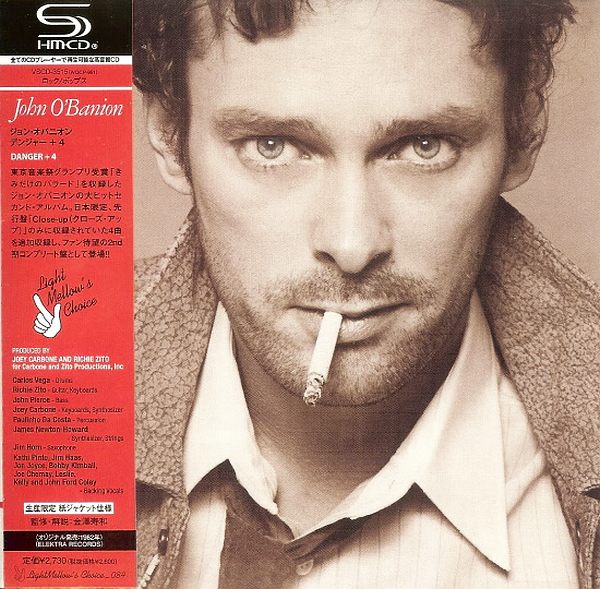 After the recent post of JOHN O’BANION‘s just reissued self-titled album, one of you asked for his second effort “Danger“. This one is not part of the 2016 ‘AOR Best Selection 1300’ series, but it was released not so long ago in Japan on SHM-CD mini-LP fully remastered plus 4 juicy bonus tracks.

As happened with the first John O’Banion album, “Danger” was again produced & arranged by the magic duo Richie Zito / Joey Carbone whom even perfected the polished, huge sound of the singer’s debut.
If the first was great, “Danger” is simply wonderful.
Pleasant results usually follow the collaboration of great songwriters + great singers and we get no exception here. The Joey Carbone / Richie Zito / Kathi Pinto partnership on one side and The Great Voice on the other has resulted in a terrific example of pure ’80s AOR.

There are many standout tracks here that show a vast improvement over the debut album, if that was possible… Additionally, the sound design in “Danger” is more muscular, upfront, many times bringing to mind Toto ‘IV’.
The session crew is pretty similar to the first album, with Zito, Carbone, Dennis Belfield, Carlos Vega, etc providing their skills plus the likes of Bobby Kimball, Joe Chemay, Joe Pizzulo, and more shining on backing vocals.

I always loved title track ‘Danger’, playing my old cassette to death alongside Toto’s Hold The Line and alike. ‘She Doesn’t Mean A Thing To Me’ offers more primo ’80s AOR of the highest order, while the soaring ‘Thru The Eyes Of Love’ recall Balance’s second album.
‘Deep In The Night’ is a great showcase for O’Banion’s crooning, then there’s a catchy melody on ‘Let Me Be Yours Tonight’.
We have two smooth ballads on ‘I Don’t Want To Lose Your Love’ and ‘Our Love’ in the best LA West Coast tradition, and a movie soundtrack ready tune in the lovely ‘Take Me Back’.

This SHM-CD reissue includes 4 little gems as bonus, all tracks appeared in a Japan-only release titled Close Up. It was a promotional vinyl LP never released on CD and all these songs are collector items.

“Danger” is an awesome classy ’80s AOR album with the typical West Coast touch from John O’Banion and the cats participating. There’s not a weak song, O’Banion vocals are at the top of his game, and production is fan-damn-tastic.
Although appeared in 1982, “Danger” is one of those records that doesn’t sound dated today largely due to the clean and incredible detailed production – how can something sound bad if Richie Zito is involved?
This is a superb Japanese remaster on a high quality SHM-CD, get your copy pronto before become out of print.
A CLASSIC