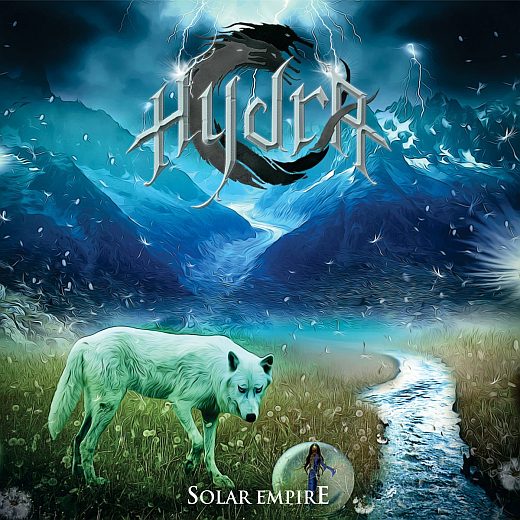 “Solar Empire” is the second album (released today) from Germans HYDRA, a female-fronted band which musically is as versatile as the mythological monster with many snakeheads they take their name from.

HYDRA are influenced by many different rock styles such as melodic metal, power metal and progressive metal with sympho touch.
As the opposite to the majority of bands from the current scene amalgamating these genres the focus here is not a classically trained voice. Instead, front lady Lisa Rieger integrates her clean pipes into the musical tapestry with a traditional metal feel, giving the band its characteristic enchanting melodies.
Musically, Hydra is driven by deliberate contrasts: strong heavy riffs meets soft, ethereal arrangements evocative of fairy tales recalling traditional metal.

There’s a concept on “Solar Empire”, a story about a loving couple. The female protagonist ‘Lanya’ is living in a world called ‘Lunar’, while the male protagonist ‘Am’ran’ is an inhabitant on ‘Solys’, but their love is not tolerated. Yes, “Solar Empire” tells the classic story of a forbidden love.
But you can enjoy each track individually, and there’s a lot of variety to enjoy here.

You have from a symphonic / melodic metal stomp in ‘Towards The End’ coupled with choral backdrops, to an aerial soft number in ‘Crystalline Cage’, indeed adorned by crystal clear orchestrations, flutes, bagpipes and sweet vocals.
In the middle, we find more bouncy titles such as ‘Days Of Thunder’ with its catchy rhythm and some hard rock structures, then let’s not forget the symphonic 7+ minute epic ‘Horns Of Erakor’ featuring guest vocals by Henning Basse (Firewind / Epysode), a real belter.

Everything in “Solar Empire” ticks the right boxes for a successful melodic metal + light power / progressive metal effort, blending classic with modern arrangements regarding these genres.
Lisa Rieger owns a powerful clean register turning quite sweet when needed, helped in duets by Zuberoa Aznárez (Diabulus In Musica) and Jule Dahs (Ex- Skadika) on a couple of tracks for even more variation.
Instrumentation is tight and arranged to detail, benefited by a pristine production.
Solid record from this very interesting German act.
Strongly Recommended