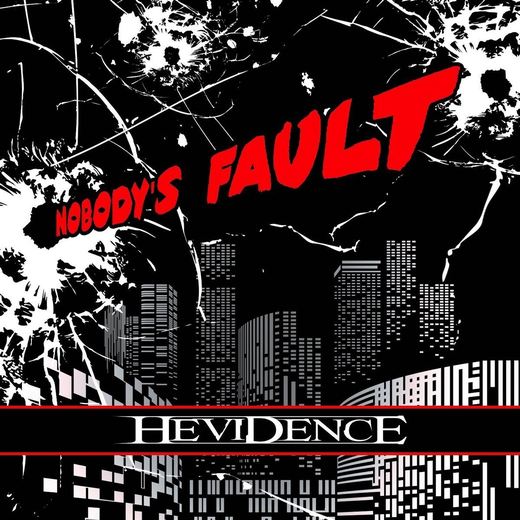 “Nobody’s Fault” is the debut CD on the Frontiers Music roster for HEVIDENCE, the brainchild of Italian Diego Reali known as the guitarist of the progressive metal cult band DGM. With Reali, DGM released six full-length celebrated records and toured world-wide for over ten years.

In 2006 Diego wanted to stretch out and try other musical styles. So he started to work on different projects spacing between many different kinds of music (blues, indie, country, pop & rock). He spent few months playing with his brother’s indie band Happy Never After having several jams and gigs around the country.
Meanwhile, Reali begin writing songs with a new band in mind based on classic Euro hard n’ heavy sounds. In 2010, he called his brother Stef Reali (Hijack Party) on drums and Andrea Arcangeli (DGM) on bass and founded Evidence, with whom released their first album in 2011.

Nowadays, and after some line-up changes, Reali is back with this new album “Nobody’s Fault” and a new band name (from Evidence to Hevidence).
The motto here is classic melodic metal / hard rock from the late ’80s plus some straight forward melodic hard rock approach that makes the whole result a solid collection of punchy stuff.

The CD starts with the electrifying ‘Dig In The Night’, some kind of Axel Rudi Pell meets Whitesnake, followed by the commercial title track ‘Nobody’s Fault’ close to melodic hard rock with unique, beautiful melodies, and tons of backing vocals in the chorus. A Highlight.
‘Miracle’ is very ’80s and pretty heavy, ‘So Unkind’ rocks with a relentless rhythm section and fine vocals, and also the vocals take center stage in ‘Ave Maria’, a quite creative tune with a melodic background.
Then the effective ‘Overdrive’ and ‘I Want More’ give leadership to the guitar and both rock hard.

In a more classic hard rock vein there’s the catchy ‘Out Of This Time’ and the punchy ‘Pack Your Bags’ which despite its heaviness has a very classic rock skeleton and a fully insistent rhythm.
‘Note’ is a little instrumental showcasing Reali’s skills, and on the digital only bonus track we have a nice, stripped take on ‘Dig In The Night (acoustic)’.