This one was requested many times, quite hard to find.
Toto singer Joseph Williams and exquisite Swedish guitarist Peter Friestedt released together a wonderful studio album ,and while presenting the record the idea for a tour arise. Then joined forces with former Chicago voice Bill Champlin for an European Tour with an All Star Band: Bill’s wife Tamara Champlin on vocals, Herman Matthews (Kenny Loggins Band) on drums, Norwegian top-notch bassist Per Mathisen (Bill Bruford Group) and Stefan Gunnarsson -one of the most promising new Swedish artists- handling keyboards and additional vocals.
The tour was a huge success with sold out venues and great reviews. One of the concerts was filmed and recorded, released in Sweden on CD & DVD as “BILL CHAMPLIN, JOSEPH WILLIAMS, PETER FRIESTEDT : Live In Concert / All Star Band”.

Surprisingly, the setlist does not includes songs from the Williams / Friestedt album, it’s focused on Bill & Joseph’s songs from their solo careers and Peter’s two ‘L.A. Project’ albums.
“Live In Concert” opens with Williams leading a take on the David Paich co-written “Goin’ Home”, one of two Toto-related cuts, as Williams and Champlin begin trading back and forth — with each song a resonant moment in time.
“Take It Uptown” and the closing “Satisfaction”, both from his pre-Chicago 1981 Runaway solo album, find Champlin howling with undiminished power.

“After The Love Is Gone”, the Grammy-winning Champlin track that became a huge hit for Earth Wind and Fire, is given an oaken, deeply emotional reworking. If there is song from his solo career that connects the dots with Champlin’s chart-topping career with Chicago, this is it.
Their take on “Turn Your Love Around”, a Champlin hit for George Benson, breaks out of the original’s blueprint with a few well placed whiskey-soaked vocalizations.

One of my favorites here is the Steve Kipner & J. Parker penned “Hard Habit To Break” delivered in an uptempo, melodic and powerful version with both singers dueting accompanied by Tamara Champlin, Stefan Gunnarsson orchestrating superb keyboards and Friestedt building a heavenly guitar background.
Talking about Friestedt, I have no doubts that the man is the new Steve Lukather. His class, top-notch sensibility and glorious guitar tone shines on this recording. “Where To Touch You” is taken from his L.A. Project II (re-recorded for Williams / Friestedt album as well) in a more uptempo version here.

In fact, most of “Live In Concert” is inclined more to melodic rock / AOR sounds than the Westcoast approach expected from these musicians, and this is a good thing as we discover another side of these songs never heard previously.
This happens as well with the former Chicago No.1 hit “Look Away” which is given into new life as a raw, stripped-down acoustic number with Williams joining-in on the achingly sad chorus. They then throw themselves completely into a muscular reading, almost melodic hard rock sounding of “This Fall”, a Williams solo tune co-written by Lukather. 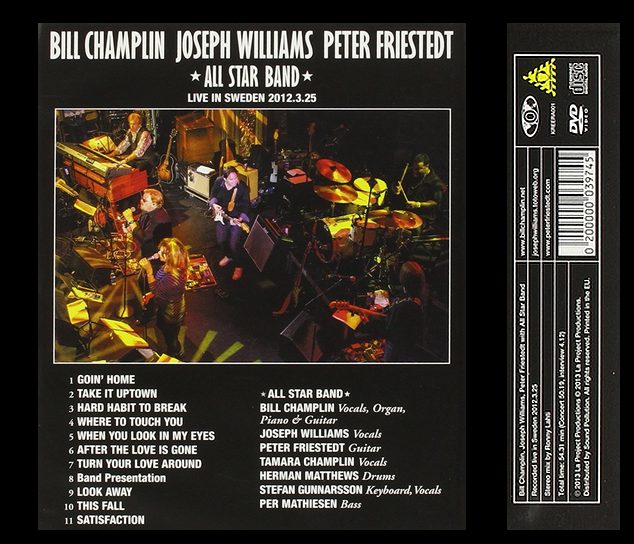 “Live In Concert” is much, much more than an ordinary live recording. First of all, the performances are so clear and precise as on any studio recording, but benefited by the adrenaline of the stage.
Second, you have never heard these excellent songs (most of them classics) arranged and played in this ‘rocking’ way. As I wrote above, the overall sound on this concert lends to melodic rock, and believe me, there’s an enviable vitality here.
So AOR / Melodic Rockers rejoice, don’t miss this CD, a must have in your collection.
Excellent.