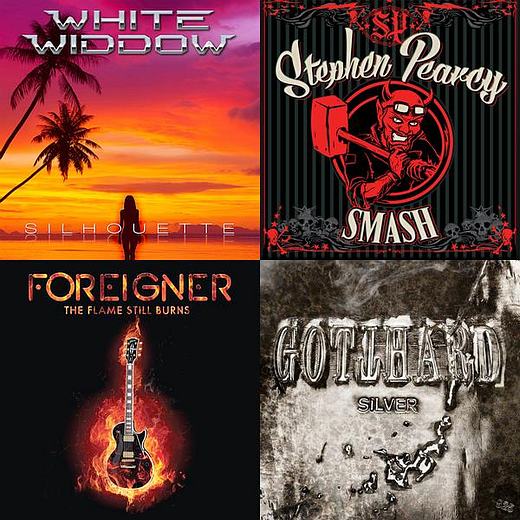 From the next Frontiers Music next month release batch we have new tracks by ENUFF Z’NUFF (the punchy ‘Dog On A Bone’), HEVIDENCE (the catchy melodic hard rocker ‘Overdrive’ and the groovy ‘I Want More’), ETERNAL IDOL (the powerful ballad ‘A Song In The Wind’) and the very promising DARIO MOLLO’S CROSSBONES (the raising ‘Take Me High’). We have presented the previous advances from all these releases, and the new tracks confirm the quality of the albums to come.

Also via Frontiers, on January 27, 2017 will appear Stephen Pearcy’s fourth solo album, Smash. The original vocalist and founding member of the platinum rockers RATT has provided as advance ‘I Can’t Take It’, mixed and mastered by none other than the legendary Beau Hill, the producer of RATT’s first four albums, among many other hit records.

If you need classy AOR then take a listen to WHITE WIDDOW’s ‘Stranded’ from the new album for AOR Heaven Records. Love those keys.
Speaking of prime AOR Melodic Rock Legends FOREIGNER are ready to release a 10-inch vinyl EP, ‘The Flame Still Burns’ via Rhino Records. The highly collectible EP features a brand new recording of the title track, a song Mick Jones wrote for the film Still Crazy.

‘Stay With Me’ is the first single from Swiss hard rock veterans GOTTHARD, taken from the band’s upcoming twelfth studio album Silver which will be released on January 13, 2017. Great song.
Finnish melodic metallers BURNING POINT, whose current lineup includes singer Nitte Vänskä (ex-BATTLE BEAST), will release their new album The Blaze via AFM Records. The two advance tracks, the melodious ‘Time Has Come’ plenty of keys and the heavier ‘The King Is Dead’ sound fabulous.

BLACK STAR RIDERS will release their third studio album, Heavy Fire, in February 2017. First single ‘When The Night Comes In’ is ridiculously catchy and I can’t wait for the full CD.
Melodic Rockers SANTA CRUZ are back after some line up changes and the new single ‘Drag Me Down’ sounds really well.
Also coming from twilight zone are veterans AUTOGRAPH with a new album almost ready, to be released next year. ‘Every Generation’ is very promising. ‘Fairytale’ is the new rocking song from glamsters SWEET LEOPARD, from their new album to be released soon.