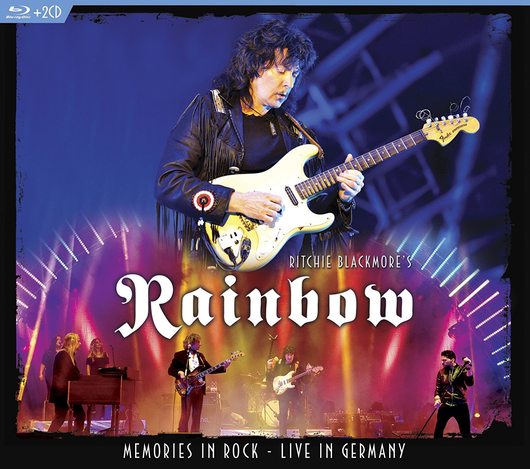 Last Summer 2016 legendary guitarist Ritchie Blackmore made many long-held dreams come true for his fans as RITCHIE BLACKMORE’S RAINBOW played three concerts in Europe, two in Germany and one in England. The two German shows at Loreley and Bietigheim were caught on tape & camera to produce “Memories In Rock : Live In Germany“, released via Eagle Rock Entertainment today November 18.

Ever since Ritchie Blackmore speculated about doing a couple of Rainbow shows in 2016, hopes and expectations have lead to very emotional discussions between fans. To the disappointment of those hoping for one of the former lineups to reunite for the gig, Blackmore didn’t go the easy way and – as often – assembled a new team of musicians to accompany him on this adventure.

The band finally announced consisted of current Blackmore’s Night drummer David Keith, former Blackmore’s Night bass player Bob Nouveau, the great Jens Johansson on keys (also Blackmore’s Night contributor) and Lords Of Black singer Ronnie Romero, which lead to even more discussions between fans and even former Rainbow members with Joe Lynn Turner claiming the planned lineup will be “a Ritchie Blackmore band, but certainly not Rainbow” overlooking the fact that Rainbow has always been what Ritchie Blackmore wanted it to be.

Three shows took place, two open air shows in Germany at Loreley and Bietigheim while the third show was staged at the Genting Arena in Birmingham, UK. While the two German shows were recorded on audio and video for this release, the UK show wasn’t recorded, which is unfortunate as it did not only feature the most consistent band performance of all three evenings but also was the only show featuring “Soldier Of Fortune” and “Burn”.
Despite all the discussions about the musicians on stage, the setlist had been the major point of criticism, including way too many Deep Purple songs while leaving out a bunch of Rainbow classics.

Is “Memories in Rock – Live In Germany” an album worth buying? That’s a question hard to answer. It’s a good live album, although for me is more a Ritchie Blackmore solo album than a Rainbow one.
If you are curious how Blackmore sound in 2016 (yes, he still can rock, and really well), the audio CD’s offers an enjoyable sound with clear dynamics and a well-balanced mix between each instrument.