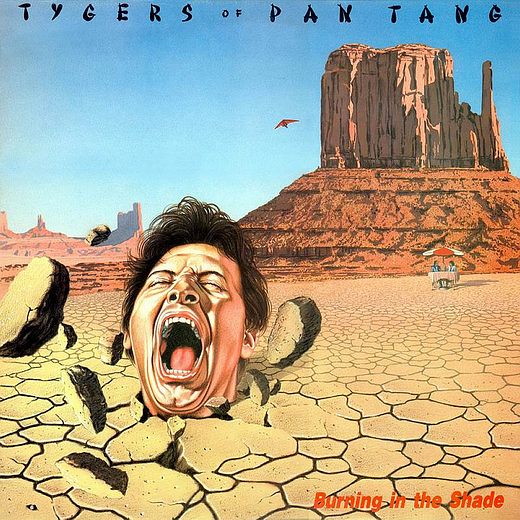 With the new (and great) new TYGERS OF PAN TANG coming up soon, it’s a great opportunity to check the remastered reissue of “Burning In The Shade“, the band’s more ‘AOR’ album.
This is the Cherry Red Records / Lemon Recordings remaster done some years ago, now with all the physical CD’s sold out the label decided to re-release it digitally.

Tygers Of Pan Tang was one of the bands to define the NWOBHM sound, but in the mid-80s they changed in favor of the dominating Rock style from the era: melodic hard rock and arena-ready AOR.
The band already flirted with this on the previous album The Wreck-Age, however it’s on this “Burning In The Shade” – originally appeared in 1987 – where the AOR waves dominate the entire record.

Jon Deverill’s vocals soar over elaborated melodic tunes such as ‘Hideaway’, the pumping ‘Hit It’ or the highly harmonic ‘Are You There?’, whereas the classy ’87s AOR sound is fully developed on the spectacular midtempo ‘Dream Ticket’ or the superb keyboard-filled ‘Sweet Lies’.

Unheard by many melodic hard rock / AOR fans which never noticed Tygers Of Pan Tang’s change in sound & style on this album, “Burning In The Shade” includes some terrific AOR tunes with that characteristic British touch in this genre.
Highly Recommended.