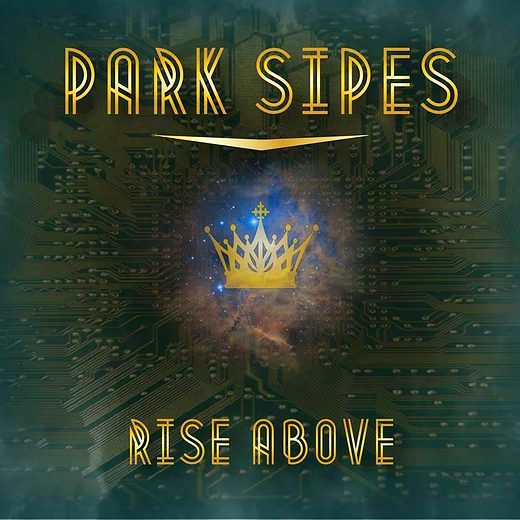 North Carolina based musician PARK SIPES has appeared in a variety of recording projects as session man, but “Rise Above” is his first solo, full-length release. And Park has delivered an entertaining, well-constructed collection of classy US Melodic Rock with the help of some talented colleagues.

Park has had brushes with the big names. He was one of the vocalists on Trans-Siberian Orchestra’s 2015 album. And his ‘Rise Above’ album features some big names, with Joel Hoekstra (Whitesnake, Night Ranger) serving as lead guitarist on three tracks and Marty Paris (Paris Keeling) on another.
Park also co-wrote ‘Life (Revisited)’ with Marty Paris and Kelly Keeling (Baton Rouge, MSG, King Kobra, Paris Keeling), though the rest of the album – and the songwriting is tightly-structured, well-considered, and impressive – is written solely by Sipes.

The album opens with ‘Anytime, Anyway (Rise Above)’ an energetic, hope-filled melodic rocker that mixes soaring vocals with forceful and occasionally blistering Joel Hoekstra guitar work. The overall sound is late ’80s with a driving chorus.
Then ‘Caught In Your Storm’ is more groovy in a midtempo pace but with an AOR heart at its core despite the modern guitars. Sipes’ vocals are smooth here, and the guitar solo really good.

‘This Love’ is a particularly catchy number as it utilizes Park’s high, powerful vocals across building verses and soaring choruses, with occasional soft stretches that serve to emphatically contrast to the rest of the song’s power. It’s somekind of early ’90s Bon Jovi.
You can hear Park’s classic rock formation through the heartfelt ballad ‘Don’t Chase The Night Away’ which sports a serious FireHouse feel.

Instrumental ‘A New Horizon’ holds my attention better than most instrumentals as it has a really good main melody and a strong skeleton featuring some scorching Marty Paris axework. It fits well within the disc musically; the continuity on “Rise Above” is truly clever, with each song varied but belonging to a cohesive family.
‘Breathe’ bring to mind the ‘adult’ Poison from the Native Tongue era, but somewhat rocking slow and midtempo (or semi-ballads) are a strength of Park’s, and he showcases a few more of them on the album in the sweet ‘Midnight Ride’ and the emotive ‘Life (Revisited)’.

A mix of late ’80s-style melodic hard rock and US classic rock are the core of Park Sipes’ debut “Rise Above” which calls upon a variety of musical influences. But basically, think Bon Jovi / Warrant ‘adult side’, Mariah, acoustic Tyketto, etc.
Perhaps too many midtempo / ballads but this seems to be Sipes’ comfort zone and he’s good at it. Production is good for an indie but with a major budget some tracks here could have been a blast in Rock radio.
Highly enjoyable material.