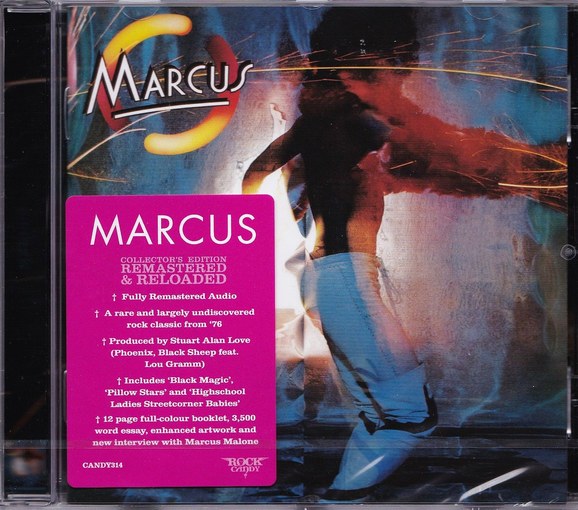 This month’s Rock Candy remastered reissue batch includes true rarities, and MARCUS self titled LP fits in this category for sure.
This album is a truly a remarkable artifact. Originally issued in 1976 to little or no acclaim, the record, despite it striking cover art and incendiary contents, sank without trace until British music publication Sounds afforded the record a glowing lead review.

Aficionados and avid fans of hard rock began a frantic search to obtain copies and were pleased to find that the praise was indeed well deserved. By then, however, the band had already spilt up, disillusioned by a lack of interest and receiving zero promotion.
It was an incredibly unfortunate set of circumstances as the album is a true cult classic, a mid-Seventies hard rock record with the reach and depth of a band that, without a doubt, should have risen to the very heights of success.

Formed in Detroit by leader and vocalist Marcus Malone (a former member of Mitch Rider’s Detroit Wheels), the group was discovered and brought to Los Angeles by soul legend Ike Turner, who secured them a deal with United Artists Records.
Produced by Stuart Alan Love (Phoenix, Luo Gramm’s Black Sheep) ‘Marcus’ resonates with impressive depth and maturity. The music is both accomplished and bold, fusing the grand swagger of Aerosmith with the progressive heaviness of Deep Purple plus some early Queen.

Featuring three lead guitars soloing away in a triple attack formation, alongside intricately arranged material, the record boasts a bevy of classic rock cuts, including ‘Black Magic’, the melodic ‘Salmon Ball’ or the Ted Nugent-like ‘Pillow Stars’
The very Deep Purple / Coverdale-era ‘Highschool Ladies Streetcorner Babies’ is plenty of fire, the early Aerosmith-esque ‘Dream Wheel’ is plenty of swagger, while fans of Queen II album will fall in love with the terrific ‘Rise Unto Falcon’.

Honestly, I never heard about Marcus before, and I am very impressed. Marcus Malone’s vocals are melodic and with a deep presence, while the band performance is incredibly tight, including renowned bass player Tim Bogert (Vanilla Fudge, Cactus, Hollywood Monsters) in the line up.

Another remarkable point is the excellent polished production for the era, which now with this pristine remastering makes this album sound almost contemporary.
If you are not so friendly to ’70s material, give Marcus a chance and you’ll be pleasantly surprised, as I did. An incredible statement of intent from one of the world’s best kept secrets and, sadly, greatest losses.
Highly Recommended