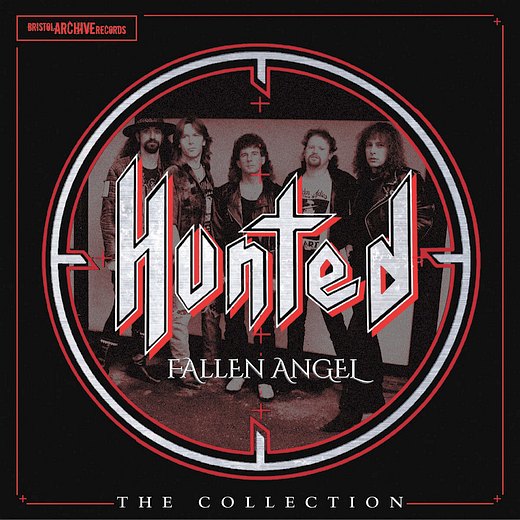 Bristol hard rock quintet HUNTED arrived too late into the scene in the early ’90s, but it’s never too late to discover their recorded (and unreleased) music now compiled under the title “Fallen Angel : The Collection” just released yesterday.

If talent and timing are the two prerequisites for success, Hunted had only the first of them working in their favour. Back in the early Nineties, the fashion in rock music was to schlep around in plaid shirts pretending to be glum in emulation of such grungemeisters as Nirvana and Pearl Jam.
This was not a time to launch a career in well-crafted melodic hard rock with soaring twin lead guitars. With the odds stacked against them from the outset, the remarkable thing about Hunted was that they managed to achieve so much during their all-too-brief flowering, winning a national battle of the bands contest and building an enviable live following.

Guitarist and Hunted founder Bob Starling had already tasted a modicum of success with Stormtrooper. Joining forces with old chum and fellow guitarist Dave Preston in the spring of 1992, Bob swiftly secured the services of vocalist Andy Milsom, bassist Mark Williams and drummer Andy ‘Woody’ Knight. By Christmas, the band had clocked up gigs at all the key venues on the local live circuit, including the Bristol Bridge Inn, the Fleece and the Bierkeller.

But 1993 was to be Hunted’s big year. In January, they recorded their first, self-financed EP, ‘Streets of Fire’, as a statement of intent to become more than just another bunch of wannabes playing local pubs for beer money. On a roll, they entered and won Radio 1’s Rock Wars contest in June, bagging a recording session at the legendary Maida Vale Studios. This was broadcast twice on The Friday Rock Show, in August 1993 and January 1994.
Now established as Bristol’s leading hard rock act, they secured coveted local support slots with Steve Grimmett’s Lionsheart and ex-Iron Maiden men Paul Di’Anno and Adrian Smith’s respective solo projects.

1994 continued on a high with an invitation to go to New York to discuss a potential development deal with RCA. Six new songs were recorded for the occasion and the A&R people were suitably enthusiastic.
Back in the UK, Hunted played the Marquee and recorded more material for their proposed debut album, ‘Crawl’. But the RCA deal fell through, hitting the band hard.
With disillusion setting in, it was only a matter of time until the inevitable split in 1995. 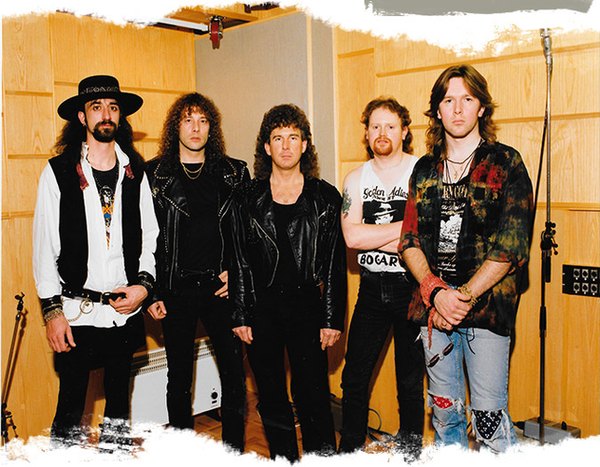 “Fallen Angel [The Collection]” comprises all these recordings.
Musically Hunted was classic Eighties melodic hard rock with a little edge, in the same vein of other British acts such as Skin, Little Angels, or the great and underrated Kiss Of The Gypsy.
The songs are filled with melody, twin guitar and vocal harmony, groove, catchy hooks and refrains in the arrangements, and rippin’ guitar solos. Andy Milsom has a classic singing voice, pure rock with a smooth, melodic, yet determined, style.
The production across all the songs, considering no label support, is pretty good giving every element clarity, notable in the definition of the bass lines.
In other words, it’s everything you love about classic hard rock whatever the decade.

This 15-track collection delivers a welcomed variety, being among the highlights ‘Strangers’, the edgy ‘Judgement’, and ‘Streets Of Fire’. Then ‘Wish U Wuz Dead’ is a tongue-in-cheek rocker, while ‘Victim’ has a heavier thumping attitude.
Another favorite is ‘Swing Of The Pendulum’ which has this Middle Eastern feeling in the guitar line. It’s a fast-paced number with lots of groove, a great vocal arrangement and abundance of glimmering guitar lines. Surprisingly, or maybe not, there are no ballads to be found in the collection.

Not to be confused with the currently active progressive power metal band of the same (also from England), Hunter was, from songwriting to musicianship to production, an immensely talented band with great ideas for some really good hard rocking music.
But you know how music industry works, moving by the next big that’s the next big profit. Hunter was playing this brand of hard rock at the wrong time. Yet, fans of the classic sounds of the genre get the last laugh with Hunted’s “Fallen Angel (The Collection)”.
Strongly Recommended