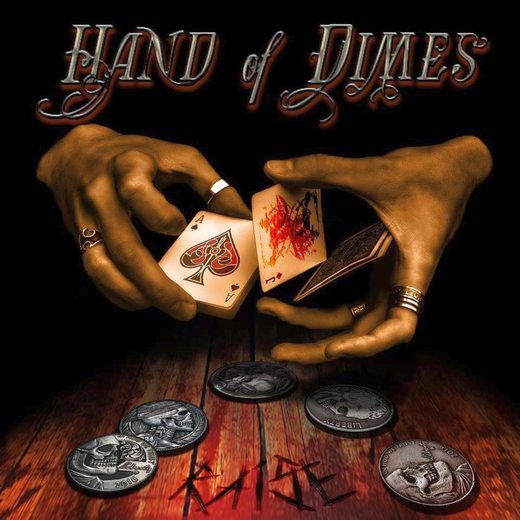 Fronted by Welsh rock legend Nev MacDonald HAND OF DIMES are presenting “Rise“, the band’s full length debut after their really good EP presented on this blog when appeared.
MacDonald was the founder member of UK hard rock favorites Skin during the Nineties. But Nev also was part of the acclaimed Welsh AOR act Kooga who released the much beloved disc Across The Water in 1986.

His partner in crime in Kooga was the excellent songwriter / keyboardist Neil Garland, and both accomplished musicians joined forces again for HAND OF DIMES, a band that has been relentless playing shows since its formation and currently supporting FM at their ‘Indiscreet 30’ tour. So this give you an idea of their quality.

Hand Of Dimes has a classic rock sound with pulsating guitars, classy keyboards and a bouncy rhythm section guided by MacDonald’s enormous bluesy roar. Nev’s vocals are powerful, controlled and full of emotion. Just check the incredible ‘Another Sunday’, a true gem.
Songs like ‘Looking at You’ and ‘Bad Reputation’ were given the spacious arrangements to show that off, much in the way Free and Bad Co. did with Paul Rodgers voice.

‘Angels and Demons’ and ‘Jacobs Ladder’ are both more midtempo paced, atmospheric pieces creating a more intimate mood, the for pumping rockers, ‘Pinstriped Arrogance’ with its classy Whitesnake feel, the kickin’ opener ‘Guilty’ and the funkier ‘Come the Hour’ are real winners.
Neil Garland add some great keyboard work on the likes of ‘Stranger in my Home Town’ or the soulful ‘Sail On’, while hiding behind shades the guitar work of Colin Edwards is really tasteful.

“Rise” is a terrific classic rock debut from Hand Of Dimes full of excellent melodies and some truly awesome songs. There’s not a single filler among the 13 tracks on offer, produced in the old-fashioned way but with potent output.
Don’t miss “Rise”, believe me, it’s a fantastic record.
Highly Recommended