After having played at the prestigious ProgPower USA Festival alongside the greats, the new band from Montreal FRACTAL CYPHER enters the progressive metal arena with their first album “The Human Paradox“. And it’s an absolutely awe-inspiring debut.

Among the many things I liked about Fractal Cypher is their melodic musical approach for the most time, and their – typical Canadian – pristine sound.
Also is blatantly obvious after the first song listen the breadth and depth of both musicianship and songwriting. The guys in Fractal Cypher can write imaginative songs and play extremely well together. It’s like the prog metal muses found this quintet and fused their ideas and aspirations together.

Simon Lavoies’ vocals remind me a lot of James LaBrie of Dream Theater (which is no bad thing) yet at places growls especially during the heavier tracks, and it works. Vincent Bruneau shreds like a Formula 1 driver does his tyres with a clean distortion, while Steven Cope’s drums are infectious & firmly planted in the Mike Portnoy stylistics. After a couple of listens my feet were banging along with the kick & snare quite happily.

But here come another aspect I love about Fractal Cypher; there’s a significant keyboard presence right from the very start, like a lingering solo to begin ‘Lost’, the opener. Piano, synths, have a large role in the song compositions.
It’s no surprise really when you look at the song credits. Keyboard player Ludovick Daoust wrote the music for every song.
The exception is ‘Prison Planet’ where he was joined by Bruneau, a fine guitarist with solos both stinging and soaring. He has a classic hard rock and metal delivery, lesser neo-classical influenced than most prog metal 6-string players. 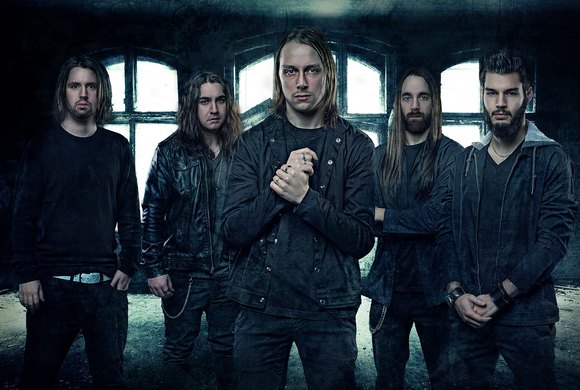 Among my favorite cuts I should mention the highly melodic – complex yet accessible compositions – such as ‘The Ghost Of Myself,’ ‘Final Abode’, or the metal ballad ‘Awakening’. All musically challenging but catchy at the same time.
‘Endless Circle’ features big drums & riffs and a bombastic keyboard solo, and ‘Shinning A While’ is an eight-minute monster with many time changes but mostly in a midtempo pace with nice, clean, white bread vocals and guitars more in a hard rock style.
As said there’s a couple of tracks including some growls and a more heavy approach. This seems to be a rule now for the genre to get a more wider audience. Of course these are my least favorite songs, but in the context, work fine.

“The Human Paradox” is blasting debut from Fractal Cypher, ridiculously technical but hook filled at the same time. Think Dream Theater Images & Words / Awake era. The guys are still looking for their own style yet, as they try more heavy stuff on some songs but they excel at the clean / melodic prog metal material.
For a band that’s only been around since 2014 the songwriting & the musicianship on this debut is second to none. “The Human Paradox” shows the maturity of a band much older than 2 years.
Easily among the best prog metal albums I heard this year so far.