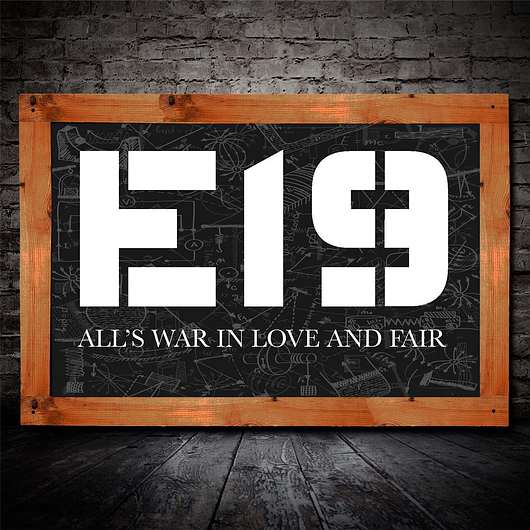 Gifted multi-instrumentalist / vocalist Gary Schutt has a respectable solo career, but he is mostly known for being part of Jeff Scott Soto’s band. E19 is his own project, a fictitious band to showcase a collection of Schutt’s earlier music written from the ’80s / ’90s, much in the vein of his 2006 awesome release Palisade. The new, fourth E19 album “All’s War In Love And Fair” (available October 4th 2016) features those Melodic Rock / AOR composed 25 years ago but freshly recorded 2016 entirely by Schutt.

Schutt started writing original compositions about 1984 and initially recording ideas from cassette to cassette deck then eventually recording and performing all the instruments in his parent’s basement on a 4-track recorder, and well into and after his stay at Berklee College of Music.
The band name is named after the practice room at Berklee that, for some reason, was popular with all the metal bands, having the nickname “metal E19”.

“All’s War In Love And Fair” showcases various aspects from Schutt’s immense talent.
He’s not only is a terrific guitarist, but also an accomplished vocalist, skilled drummer and essentially, a great songwriter.
We have here wonderful collection of Melodic Rock tunes plenty of hooks, groovy AOR melodies and of course, superb musicianship.

Opener ‘I Don’t Wanna Say It’ is lovable AOR tune with an ’80s feel all over complete with classic synths and a contagious chorus. ‘Hiding In My Heart’ adds a funky rhythm akin Extreme, ‘One Night Of Your Love’ sound like a lost ’80s Black N’ Blue track, while the sweet ‘Take Me Away’ brings back Danger Danger’s more AORish moments.

The driving ‘I Don’t Know Why’ is one of my favorites recalling George Lynch’s awesome early ’90s album Sacred Groove, while ‘Where Should I Go’ is a superb ballad (killer).
‘I Love It Live’ Shutt puts clear that he is a wizard producer as well making the song sounding like a ‘live recording’ but in fact it’s entirely made into the studio. Another terrific track with an out-of-this-world guitar work.

Holy cow… Gary Schutt in his role of one-man-band has created a Melodic Rock / AOR disc much, much better than many ‘big names’ in the genre.
A modern day recorded Melodic Rock gem but composed in the glory days that you need to grab immediately.
HIGHLY RECOMMENDED