DAKOTA is one of the best representatives of the pure ’80s AOR sound, and their self-titled debut highly deserved this Rock Candy ‘Remastered & Reloaded‘ reissue.
Formed by vocalists / guitarists Jerry Hludzik and Bill Kelly, Dakota had their roots in the late ’70s as ex members of The Buoys and Jerry/Kelly Band, before signing to Columbia / CBS in 1980.

That same year they released their self-titled album which yielded a regional hit across the country called “If It Takes All Night” (regional hit means that some radio stations played it, and most didn’t).
Thanks to this moderated success and manager contacts, Dakota later snagged the opening slot on part of Queen’s U.S. tour, which included three sold-out shows at Madison Square Garden.

Opener and first single “If It Takes All Night” launched Dakota’s career combining superb guitar melodies, breezy vintage keyboards and an anthemic, fantastic chorus. The verses are pure midtempo magic but in the chorus the song explodes with tons of harmony vocals.
“Crazy For Your Love” is a much calmer smooth AOR in the vein of Le Roux, with a West Coast approach and a big groove.

“Possession” rocks with a sustained riff and synth arrangements, while follower “You Can’t Live Without It” is a dreamy ballad with classic pianos. “One Step” returns to the rockier territory, with an early ’80s trademark sound including staccato keyboards and a great chorus.
“Restless” starts slowly but soon evolves into a hooky rocker with irresistible harmonic vocals and an outstanding melodic line.
“Crazy Love” has a radio friendly sound, while “It Gets Easier” includes lovely vocal cascades and a feel-good vibe. 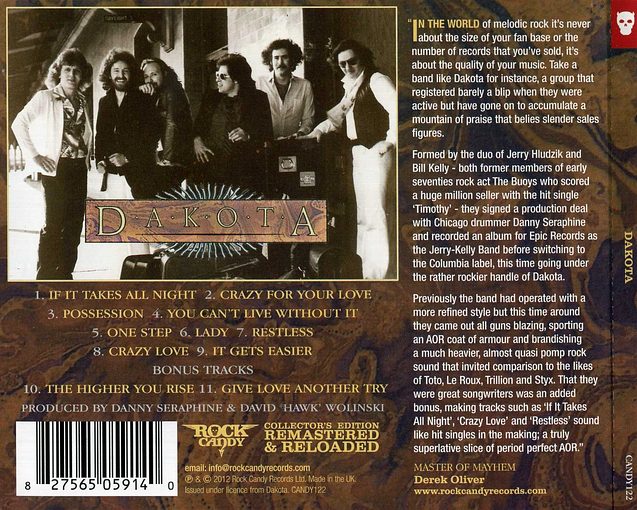 This Rock Candy re-issue at 24-bit remastering from original source tapes is just awesome. Not only the sound is terrific, it includes two very good Bonus Tracks as well.
“The Higher You Rise” is an awesome early Eighties AOR tune with synths and layers of vocals, and “Give Love Another Try” has a magical melodic rock refrain, great guitars and swirling keys.
“Dakota” is a truly superlative slice of period-perfect AOR.
A Must Have