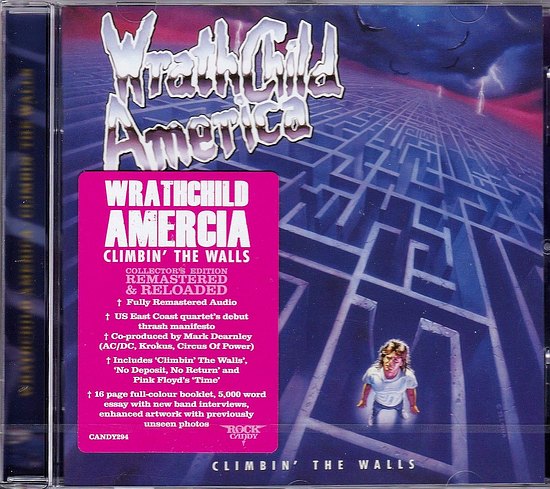 Back in the late ’80s American Rock music appeared to be splitting into two fractions; melodic hard rock and thrash metal. Although these two camps were, in effect, polar opposite, fans of either were always appreciative of the aesthetics of both.
At the heavier end of the spectrum bands such as Slayer, Megadeth and Metallica were enjoying a wave of popularity that had started to influence a number of younger acts, including Testament, Pantera and… Wrathchild America.
Based on America’s East Coast, the band, initially just called Wrathchild, developed a following and style that would eventually lead to a shot at the big time with major label powerhouse Atlantic Records.

Recorded in Los Angeles with seasoned engineer / producer Mark Dearnley (AC/DC, Krokus, Circus Of Power), “Climbin’ The Walls” was set to become a cornerstone release in the world of US metal, but plans were delayed by the intervention of a British glam metal band using the same name.
Issued with a cease and desist order the US band, at the eleventh hour, adopted the amended moniker of Wrathchild America. This necessary last minute name change added an element of confusion to the album launch.

Very much in tune with the times, heavy, raw and packed with explosive firepower, the nine tracks fitted the genre perfectly combining aggressive riffs, speed and some progressive elements in one punchy bundle.
But Wrathchild America also added a high dose of melody to their music, plus a clean and polished sound.
The in-you-face heaviness of title track and especially the masterful riffing of the menacing ‘Silent Darkness’ distinguish this release as the typical US metal of the era, and the endearing vampire epic ‘London After Midnight’ or ‘Silent Darkness (Smothered Life)’ – a hymn to being buried alive with a nice melodic guitar line in the chorus – are really cool as well. 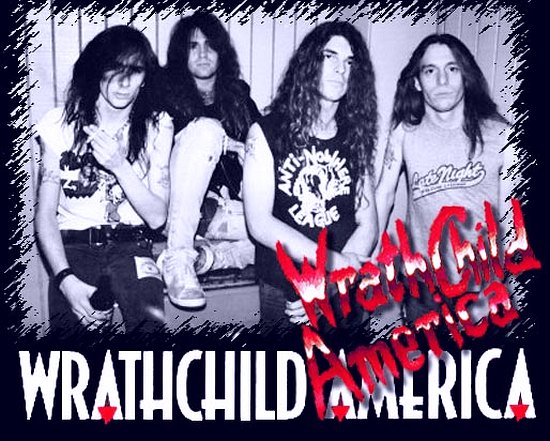 However, Wrathchild America also explored a more commercial and catchy side here on the the driving, melodic ‘Day of the Thunder’ and especially the bluesy hard rock style of ‘No Deposit, No Return’.
Additionally, there’s a reverent and competent cover of Pink Floyd’s ‘Time’, a surprising take on this classic rock track with a mouth watering twist.

Full of speedy muscular riffs, really interesting time changes and at places a truly commercial sound, “Climbin’ The Walls” is a fun and enjoyable slice of ’80s US Metal.
Wrathchild America’s musicianship is great, especially the superb drumming; Shannon Larkin’s double bass pedal work is terrific, a true definition of the genre. Production was crystal clear, as it is this 24-bit Rock Candy remaster from the original master tapes.
Ah, and this first Rock Candy batch easily could become a collectors item as there’s a typo in the front sticker (Wrathchild Amercia).
ROCKS