Now this is pleasure of a request to fulfill; “Taking A Cold Look“, the one and only album by the wonder boys Billy Steinberg & Tom Kelly under the moniker i-TEN, remastered in all its glory by Rock Candy Records.

Let’s put it simple; “Taking A Cold Look” it’s an AOR masterpiece.
The Kelly/Steinberg songwriting team were involved into the greatest albums from the genre recorded during the ’80s in one way or another; writing hits for others, arranging or providing terrific backing vocals, but it was not until the 1990’s when they got Top 10 hits charting at Billboard.

Anyway, they got the chance to record their own album, this “Taking A Cold Look”, in the first half of the ’80s. The LP may not have made much of an impact when first released but its arrival signalled a seismic shift in the Rock&pop world.
A record that came and went in the blink of an eye but containing some of the most impressive songs and musical arrangements of all time.
Produced to pin-point perfection by Keith Olsen (Foreigner) together with Toto guitarist Steve Lukather, the tracks display a healthy appetite for the kind of super glossy sound employed by Toto, Steely Dan and Journey; high grade AOR of the finest variety.

The personnel, of course, is top notch; most of the Toto band members like David Paich, Steve Porcaro and Steve Lukather itself, plus all the best studio performers of L.A. at the time such as Alan Pasqua (Van Stephenson, Giant, Eddie Money, Sammy Hagar, Starship), Mike Baird (Stan Bush, Tim Feehan, Rick Springfield) and more.

However, it’s Steinberg and Kelly’s songs that provide the bulk of the cake – songs later covered by the likes of REO Speedwagon (‘I Don’t Want To Lose You’) , Honeymoon Suite (title track ‘Taking A Cold Look’) and Heart (‘Alone’ was a #1 hit US single).

But all are true gems; ‘The Easy Way Out’ akin Stan Bush & Barrage, ‘Pressing My Luck’ with its superb chorus and midtempo AOR greatness, the velvety ballad ‘Lonely In Each Other’s Arms’ or the fantastic ‘Quicksand’ featuring a marvelous guitar / keyboard interplay and magnificent harmony vocals, which, by the way, are stupendous all over the record and set the style to follow in the upcoming best AOR albums from the rest of the ’80s.

As said, Tom and Billy would go on from the i-Ten project to pen hits for a huge array of artists, including Madonna (‘Like A Virgin’), Cyndi Lauper (‘True Colours’) and The Pretenders (‘I’ll Stand By You’) but “Taking A Cold Look”, the starting point, is recognised by those in the know as one of the most complete works of the era and one deserving full reappraisal. 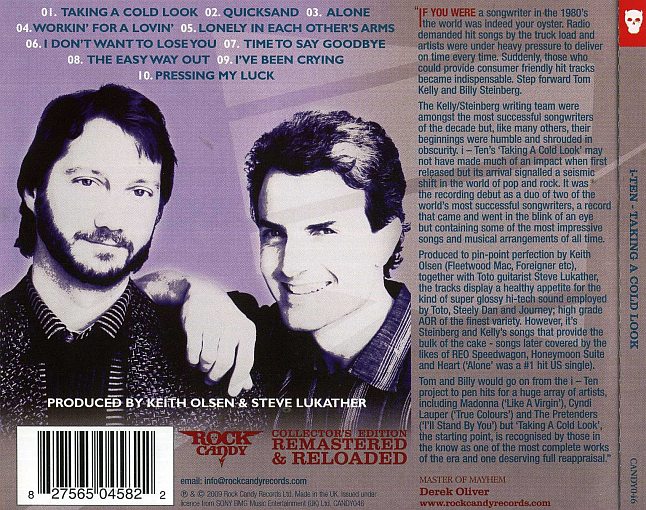 i-Ten’s “Taking A Cold Look” is a milestone in the American AOR genre, and although it was originally released on CD (1983) it went out of print soon becoming one of the most sought-after, rarest CD releases from the era.
This Rock Candy Special Collector’s Edition it’s the definitive version of this gem, perfectly remastered from the master tapes with the sound digitally shaped via POW-r technology and comes with a 12 page full color booklet including original and enhanced artwork with new photos and full involvement from the band. There is also a 4,000 Word essay on the making of the album by Dave Reynolds.
A MUST HAVE CLASSIC