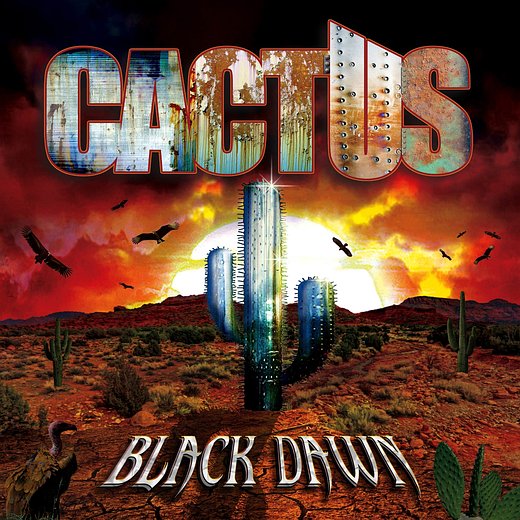 At the dawn of time, there was The Big Bang, in the Black Dawn, there is CACTUS… the band that was once heralded as America’s answer to Led Zeppelin, has returned with “Black Dawn“, a new studio album, and its first in almost seven years.
Featuring the blistering riff-rock that the band built its reputation on, “Black Dawn” is classic Cactus with a fresh new energy that the band has not had since its heyday.

Featuring original founding members in legendary Carmine Appice (drums, vocals) and Jim McCarty (guitars), along with bassist Pete Bremy; harp player Randy Pratt; and lead singer Jimmy Kunes; this version of Cactus is sure to embrace not only its long time core fans but also a whole new generation of Classic Rock enthusiasts.
While Cactus saw success from the start and soon built a loyal fan base, by early 1973, the band had collapsed. It would not be until 2010, two decades after the tragic death of original singer Rusty Day, that the group reformed with the current line up.

From the first opening bars of title track ‘Black Dawn’, Cactus rocks: a usual there’s the solid and unique Appice drums sound, the guitars bite and bluesy, powerhouse vocals Jimmy Kunes glue together for a kick-ass Classic Rock experience.
This is close to hard rock a places, with ‘Walk A Mile’ being one of my faves. ‘Mama Bring It Home’ rocks with melody, love the heavy blues of ‘Dynamite’, and ‘Juggernaut’ takes you back to a sweaty Seventies bar with dancers on the table.

Cactus 2016 is not just a bunch of veterans trying to revival past glory days, this band rocks in full force and much, much better than many ‘established’ classic rock acts.
“Black Dawn” is a vital classic rock / hard rock / heavy blues record with a vintage smell but vibrant like few in the current scene.
Highly Recommended