Swedish melodic hard rockers BULLETRAIN are releasing tomorrow their second album “What You Fear The Most“, their first via AOR Heaven Records.
And I can see why the prestigious label has signed Bulletrain: the band have grown giant steps since their formation ten years ago, and now are ready to compete with the best in the genre.

It is truly unbelievable how many fantastic melodic hard rock bands emerge from lovely Sweden. Bulletrain is one of today’s biggest hopes for this particular scene. Among bands such as Eclipse, Crazy Lixx, Dynazty, H.E.A.T and others, Bulletrain comes back again to prove that the future belongs to them.
Their Skid Row-esque meets Crazy Lixx rockin’ music is filled in with big & heavy guitars, high-pitched vocals and choruses to sing-a-long for days.

The band’s new lead singer Sebastian Sundberg has an incredible vocal range and takes the final result to a higher level. The guitars are, as mentioned above, huge and pretty heavy at places but still melodic, while the rhythm section is a blast (brings to mind Eclipse’s sound).
Much of the success to Bulletrain’s second album should be credited to the mix and overall guidance of Grammy Award winning producer Tobias Lindell, the brain behind the music from bands like Hardcore Superstar, Europe and H.E.A.T to name a few.

Opener ‘Memory Lane’ kick-off things in an ’80s fashion and brings back the golden era of US Hair Metal but with a modern, punchy production. ‘Love Lies’, that reminds me a bit of Guns N’ Roses, is yet another ‘ballsy’ rocker that takes no prisoners, then the fast-paced ‘Fight With Me’ is even more aggressive with a thunderous rhythm section and a Skid Row attitude. 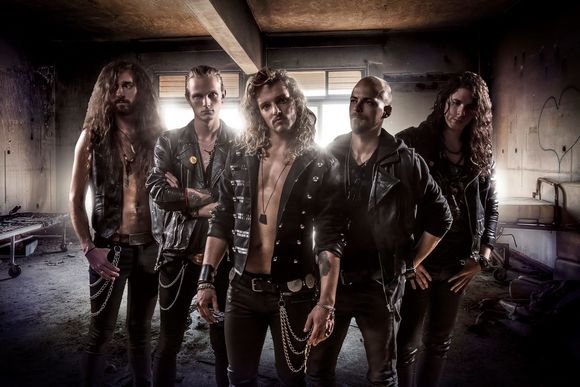 The band delivers the more melodic hard rock tune from the album with the commercial ‘We Salute You’, an anthemic tune fueled by a superb catchy hook and a memorable chorus line.
The AOR-ish ‘Wet, Tired And Lonely’ is a personal favorite, a Scandi hymn in the typical mold of the genre but updated 2016, and the moody / modern ‘Far Away’ is another highlight out of this new record.

“What You Fear The Most” is one of these kind of albums that you fall in love at once and leaves you hungry for more. Bulletrain are ready for the A-team with an assassin performance, stronger songs and the right attitude.
A solid candidate for the ‘next big thing’ in this scene.
KILLERRR