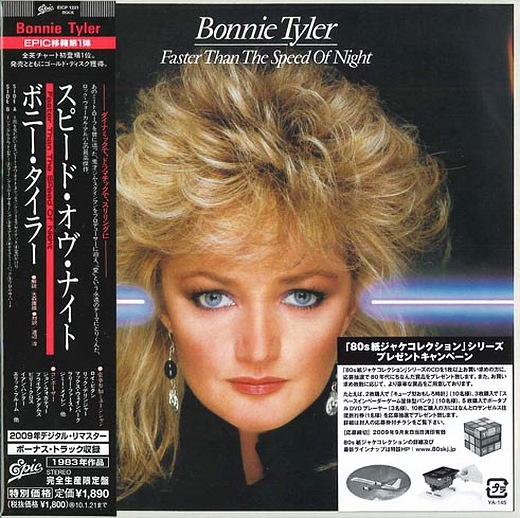 More requested stuff, the other BONNIE TYLER album released in its Japanese remastered edition; “Faster Than The Speed Of Night“, her more famous. This was a Limited Release in Cardboard Sleeve / miniLP format, now out of print and read this: used copies being sold for €1,449 !

Welsh singer Bonnie Tyler (and her manager & label) decided to change the musical direction from country music / folk / acoustic in the early Eighties and began working with Jim Steinman soon after. The aim was to convert Tyler in a female charting artist via the bombastic ’80s rock&pop sound.
A true Steinman beast, “Faster Than The Speed Of Night” was a huge seller, reaching number 1 on the UK Albums Chart and certified Silver there, Platinum in the US, and Double Platinum in Canada.

The key to the this album’s success is the production and writing chops of Jim Steinman. He applies the same flamboyant and grandiose touch that made his work with Meat Loaf so captivating (and successful), wrapping the songs in atmospheric, all-stops-out arrangements that blend drama and power chords in equal measure.
The combination of Steinman’s cinematic production style with Tyler’s smoky vocals made “Faster Than the Speed Of Night” a surprising kind of stuff for the era.

Of course the record is remembered for the huge hit single in “Total Eclipse of the Heart,” an epic ballad about longing for a lost love that starts as a quiet piano-led piece and builds into a gargantuan production built on an equal balance of potency chords and thick choral vocals.
The title track, a romantic rocker that blends lighting-fast piano runs with metallic guitar soloing from Rick Derringer, also got a decent amount of radio play.

The remainder of the album has Tyler turning her attention to cover versions, including the original version of “Straight from the Heart” which was the breakout Top 10 hit for Canadian rock singer/songwriter Bryan Adams from his Platinum album Cuts Like A Knife, and a radically rearranged version of Creedence Clearwater Revival’s “Have You Ever Seen the Rain?” that transforms the song into an arena rock tune built on a complex, classical-styled piano riff from Roy Bittan.

The standout among the cover versions is “Tears,” a heart-tugging power ballad that Tyler performs as a duet with its author, Frankie Miller. Since Miller’s gruff voice is close in style to Tyler’s, their duet has a special chemistry and they milk the song for every drop of drama it has to offer.
This combination of bombast and melodrama could have worn thin quickly, but Steinman keeps things moving smoothly by carefully pacing all the songs and throwing in odd, ear-catching elements to keep things interesting: as example, listen the chanting children’s chorus that introduces “Goin’ Through the Motions”, a surprisingly Blue Öyster Cult cover from their 1977 album Spectres.

Althoug overall I prefer the following album Secret Dreams And Forbidden Fire due its more ‘second half of th ’80s sound’, this “Faster Than The Speed Of Night” remains as one of Bonnie Tyler’s finest and most consistent achievement on record. It’s a must for anyone interested in her work and a worthwhile purchase for anyone who enjoys Rock at its most melodramatic.
Very hard to find and with a superb remastering job, this Japanese Ltd Edition includes as bonus the hit “Total Eclipse Of The Heart (Radio Edit Version)” slightly changed and trimmed for major impact.
Highly Recommended